Music for Life: enhancing music education in the Dominican Republic

Violinist Aisha Syed Castro illustrates how blessings in her musical education inspired her to create the Music for Life Foundation, helping her give back to the community in her home country of the Dominican Republic 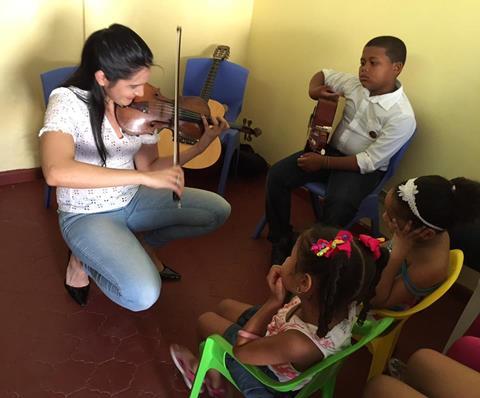 I started my foundation - Music for Life - for two main reasons that could be regarded as one and the same.

Firstly, as a Christian, I believe it is of utmost importance to give back to the community through the gifts God has given us. Secondly, I wanted to continue the legacy of Yehudi Menuhin with respect to making classical music available in every corner of society, especially in my home country.

I arrived at the Yehudi Menuhin School (YMS) from the Dominican Republic when I was barely thirteen years old. Along with the school’s high calibre concerts, we also gave concerts at hospices and schools, as well as short coachings to school students interested in music, something Menuhin himself used to do rather often before passing away. That inspired me deeply.

I realised the true power of selfless music-making; that power to elevate mankind above their individual circumstances, regardless of socio-economic background or health status. Back then, at 14 years of age, I started to understand that music was indeed made for everyone and not just for the few who could afford a concert ticket. I knew first hand what it meant to receive the help I needed to develop my potential in classical music, as I myself had received scholarships to attend the YMS, Guildhall School of Music and Drama and the Royal College of Music.

My personal experiences made me realise that music is a human right and that we should all be able to exercise it. That belief sowed a seed which has blossomed into the Music for Life Foundation in the Dominican Republic. At our foundation, all masterclasses held at the annual Musical Clinic programme are offered free of charge, as well as the participation at the Festival Infantil y Juvenil, in which we hosted over 60 children during two editions.

These programmes started in 2018 and 2015 respectively. When I started out with violin lessons in the Dominican Republic we had just a few workshops which were overseen by El Sistema in Venezuela as well as some music schools. I was five years old when I took part in one of the orchestral workshops run by the Venezuelan scheme.

Whenever I went back to the Dominican Republic while studying full time in the UK, I would give some private lessons for free occasionally, but it was not until 2010 that my mother and I decided to start the foundation, strengthening and outlining our specific vision for its present and future. Our mission as a foundation is to democratise classical music through pedagogical programmes for music students mentioned earlier, but also through visits that include short concerts and motivational talks at other foundations, hospices, orphanages, non-violence shelters, hospitals, schools, and correctional centres.

I make similar visits in other countries in the world I perform in. These include the Mehli Mehta Music Foundation in India, the Gaslini Pedriatic Hospital in Italy, the Royal Hospital for neuro-disability in London, the Salvation Army hospice in Cuba, the Sara Kubitscheck hospital in Brazil, a non-violence shelter for children in Nicaragua, the Funave Centre for children with neuro-disabilities in Spain and the Cardio-infantil hospital in Colombia. These are in addition to orphanages, hospices, correctional centres, foundations and schools in the Dominican Republic. 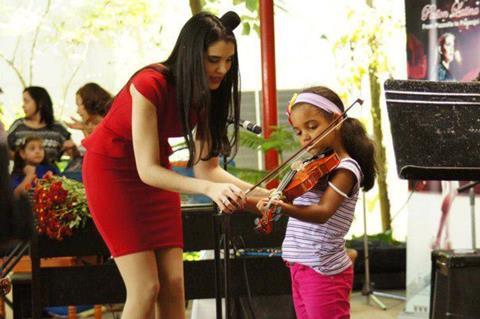 A recent visit stands out for me, where I visited another foundation and performed on an invaluable Stradivari violin (thanks to Florian Leonhard Fine Violins) for many children, sharing with them the fantastic story behind the name. Some of those children are currently in very troubled households but I feel honoured to have been able to give them a peek into what possibilities there are for them in classical music.

We have also had children in our musical programmes that have gone on to study abroad, and we are very proud to have been part of their early musical life in the Dominican Republic. Most of the children have attended the Musical Clinic programme annually since 2018, even virtually in 2020 and 2021 through the pandemic.

We hope this music foundation in the Dominican Republic will have long-term effects, not only within the music students community, but also in society as a whole. We seek to give life-changing experiences through music to the sick, the orphan, the elderly, the poor, and the imprisoned. As we educate the local community about classical music, we illustrate why we need it nowadays as a society to live life to its fullest. This is why we are called the Music for Life Foundation.