Published in May 1890, the first issue of The Strad featured Joseph Joachim, the violinist to whom Brahms dedicated his Concerto. Since then, players such as Mstislav Rostropovich, Anne-Sophie Mutter, Mischa Maisky and many more besides have brought their insight and expertise to the pages of the magazine. The Strad is an indispensible guide for string players, teachers and instrument makers alike, featuring expert advice and practical guidance each month from celebrated luthiers working with traditional techniques and the latest technological advances. Authoritative, trusted and influential, The Strad is available in print and digital editions.

Emma studied music at Nottingham University and has an MMus in performance from the RSAMD (now the Royal Conservatoire of Scotland). She has written and edited for Gramophone, Songlines and BBC Music Magazine among many other publications, and was previously editor of the Royal Opera House Magazine. Her non-musical hobbies include running, and painting and drawing.

Christian is the former editor of both International Arts Manager magazine and the Performing Arts Yearbooks. He takes care of the In Focus, Trade Secrets, My Space, Making Matters and Sentimental Work sections of The Strad, as well as all feature articles relating to instruments and lutherie, the book reviews and the news pages.

New Zealand-born cellist Davina Shum has enjoyed a freelance performing and teaching career since moving to the UK to join the Southbank Sinfonia in 2013. With a particular interest in broadcasting, Davina has contributed to the BBC Radio 3 podcast Time Travellers as well as running her own podcast As It Comes: Life from a musician’s point of view. Away from the cello and The Strad, Davina enjoys bouldering, vegetable gardening and retro video games.

Apart from bringing her knowledge as a cellist to The Strad, Marija has long had a passion for music history, having written an original thesis on the elder Cervetto for her first degree and gained an MMus in historical musicology at King's College London. She works for other music publications too (RMA journal; Gramophone), and enjoys swimming, walking, watching films and reading fiction.

Pauline started playing the violin when she was four years old and studied music at the York University. She decided she wanted to be a writer when she was six, and so The Strad has been the perfect place for her to combine her passions. Outside the office, she is working for a doctorate in African archaeology at University College London.

Rita is an Australian-Swiss King’s College London and Conservatoire of Lausanne music graduate. Other than writing, she plays violin and conducts, with a particular interest in contemporary classical music. Outside of music, she enjoys attending stand-up comedy shows and exploring the bottomless pit that is Netflix documentaries.

Mariette was born in France and brought up in Lebanon, Australia and the UK. Her career in advertising mirrors her international background and has encompassed broadcast, print and digital. She wanted to work at The Strad since it combined music, fine literature and the opportunity to meet and share her knowledge of advertising with such talented people. In her spare time she enjoys baking and aromatherapy.

Jeremy is The Strad’s senior account manager with media experience across a wide and diverse range of markets. He studied and gained a Diploma of Management Studies at Kingston University and is a keen amateur musician playing guitar and electric bass. Through working with The Strad he has discovered the joys and wonders of live and recorded classical music.

Angela Lyons is The Strad's art editor. She studied at Central Saint Martins and has over 20 years' experience as a graphic designer. Working with The Strad team she has discovered lots of new music and outside work enjoys looking at art and keeping fit. 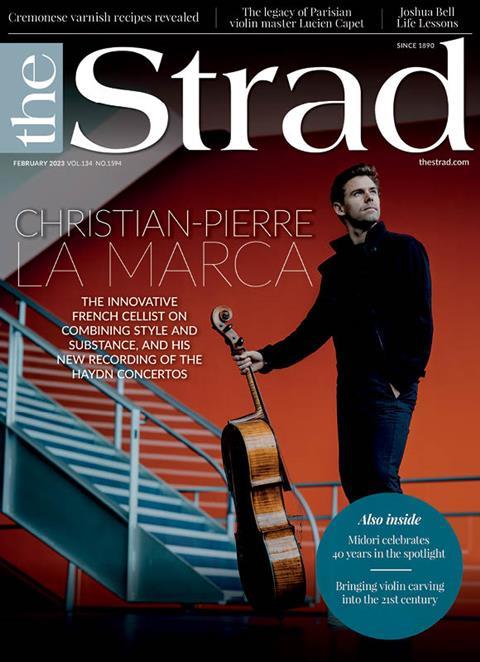 The French cellist Christian-Pierre La Marca talks to Charlotte Gardner about his influences, tutors, predilection for eclectic repertoire, and his new recording Legacy

The 19th-century French violinist and author of Superior Bowing Technique Lucien Capet was among the most influential pedagogues of his time. Tully Potter explains why

The Japanese-born US violinist Midori is celebrating her 40th year on stage. She talks to Thomas May about her formative influences, collaborations and myriad projects