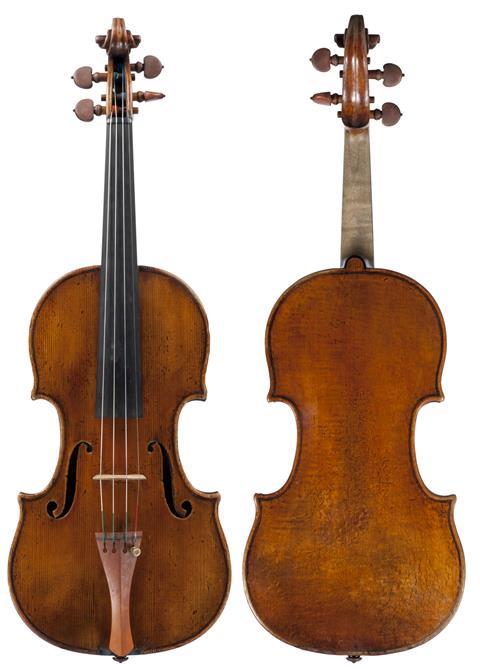 This violin has a one-piece beech back with the alignment pins placed well inside the purfling. The use of beech is often looked on as an economical choice but it has been selected by some of the best classical makers such as ‘del Gesù’, Rugeri, Testore and the Dutch maker Rombouts. Although the back is plain, the medullary rays cause the appearance to change dramatically in the light. Bergonzi used plain maple for the ribs but opted for a beech scroll with widely projected eyes, a feature made famous by his father Carlo. This violin echoes the work of his father’s ‘Sandler’ and the 1744 ‘Eddy Brown’ as well. The front is made by his nephew Carlo Bergonzi II, and dates from c.1790. The widely spaced f-holes with open stems and small triangular nicks are less refined than you’d see in previous Bergonzi generations. For 53 years this violin was played by Herman Krebbers, concertmaster of the Concertgebouw when he decided to part ways with the violin. His wish was to keep the violin in the Netherlands and to not ‘see it disappear somewhere internationally’. The Foundation considers itself very fortunate to have been able to add this to its collection.