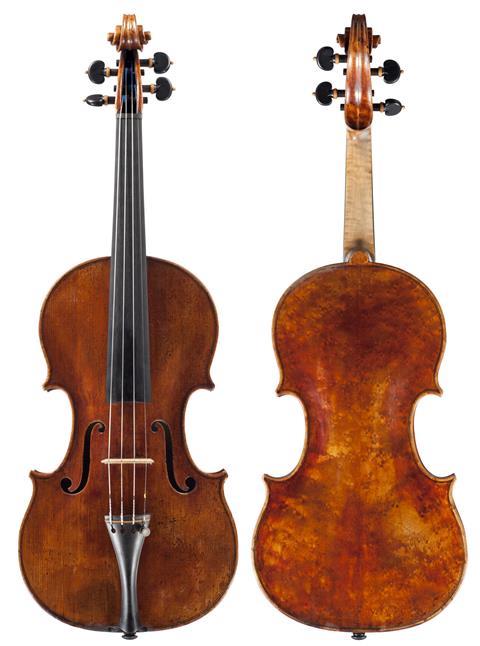 Santo Serafin had his own style within the Venetian school: controlled, cleanly finished surfaces with a varnish colour and texture that differ from those of his local fellow violin makers. Where the Venetian school is famed for its dark craquelure, Serafin had a variety of colours ranging from a pale golden yellow to the transparent reddish-brown tint seen on this 1750 violin, which is laid over bird’s-eye maple back and ribs, a choice of material often used by Serafin. His refined style and taste for delicate finishing touches is particularly seen on the scroll, which starts flat at the pegbox but flows into an expressive, full and round volute with deep cuts that end with a sharp ‘hook’ in the eye. The spine lies lower than the precisely chamfered edges, amplifying the articulate look. This even continues on his embellished labels which were made with a finely engraved plate; his name, date and location are decorated with ornaments and iconography, a look that is quite the opposite when comparing to other labels from 18th-century Italian makers. These refined details are a contrast with his hefty edges found on the body, particularly on his cellos which can be over 7mm thick in some places.