Making the bow come off the string is a delicate art. Rok Klopčič looks at various approaches in this investigation from May 2004 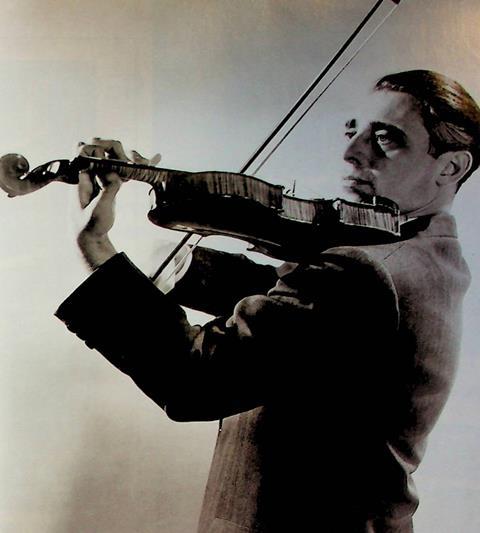 Spiccato and sautillé are the two most important off-the-string bowings, but they are often confused. One of the reasons might be their relation to speed. There is a common ground where one should be able to make the change from spiccato to sautille and back without any change in sound or cnaracter. If we take (according to Dounis), 𝅘𝅥 = 100 for semiquavers as a demarcation point, spiccato can be played up to this point. For higher speeds we must use sautillé , which can also be played slower. Furthermore, the mechanics of these two bowings are entirely different and should be approached separately.

An important difference is that in spiccato every note is played actively. As Galamian puts it: ’The bow is thrown down on the string for every single note and lifted up again’ and ’there always has to be an individual impulse for every tone’. Whereas in sautillé ’the task of jumping is left principally to the resiliency of the stick’. According to Flesch, in spiccato the player is active and the bow is passive: in sautille the player is passive and the bow is active.

Sautillé represents about ten per cent of bowing in the classical repertoire, yet performers see it as a priority

A further difference lies in the motion of the hand. According to Percival Hodgson in spiccato ’a figure eight is described in the air by every part of the bow. When spiccato is quickened to sautillé the movement of the hand changes to an ellipse, but the bow continues to describe a figure eight.’

Check slurred passages by playing them spiccato. This will show up any unevenness

The quality of the strings and the bow hair, and sometimes even the humidity of the hall or recording studio, can influence the right choice. As Rolland puts it (The Strad, June 2003): ’The information circulates between the bow, the body of the player, the string  and the body of the instrument in many different ways.’

Spiccato can be played at any dynamic, from pianissimo to forte, and in all parts of the bow. However, it is usually played in the lower two-thirds of the bow, while the upper third is reserved for special effects: ’Its most appropriate use is in the midst of a left-hand pizzicato passage for the notes which cannot be plucked,’ writes Galamian. He also advises that it is better ’to stress the horizontal element rather than the vertical… and to avoid the use of the too-steep and too-percussive spiccato… especially in the concert hall.’

For sautillé the general recommendation is to play it ’around the balancing part of the bow’, as Dounis puts it. Some violinists, like Dounis, are of the opinion that to find the balance point you should ‘balance the bow on your finger’. Rolland disagrees: ’A centre of stability appears halfway between the forefinger and the head of the stick, when held in the playing  position. At the same place lies th sautillé point.’

In this part of the bow, dynamics ranging from pianissimo to mezzo-forte are possible. For forte one should move into the lower part of the bow: many violinists think that a forte sautillé is not possible and advise changing to detache. Galamian agrees: ’The short détaché can often very successfully replace the sautillé, especially when the tempo is rather fast.’

Rimsky-Korsakov arr. Heifetz, The Flight of the Bumble-Bee

Double-stops in sautillé - or even three-part chords - are a virtuoso discipline and are best performed in the lower third of the bow. When teaching spiccato, it should at first be attempted approximately at or above the middle of the bow. With the help of the rotation of the lower arm the bow is dropped repeatedly on the string in a sort of drumming motion: the vertical component of the spiccato. The horizontal component should be added gradually and the result is spiccato. ’Good sound is achieved by a synchronisation of two opposite motions: the dropping of the bow on the string and the drawing of it across the string,’ writes Konstantin Mostras, while Galamian teaches that the movement of the bow at the contact point with the string can be represented as an arc. According to the prevalence of the horizontal or vertical component this arc can be wide and shallow, or narrow and deep (example 2), with the appropriate difference in tonal character.

According to Tossy Spivakovsky, ’Each player has to work out the correct combination of the small forearm rolling movements and the proportionate movement of the forearm, to the left or right.’ The same choice must be made about any small movement of the wrist and the fingers and about the changes in the angle and the tilt of the bow. When teaching sautillé nearly all authorities agree that the best approach is to play détaché around the middle of the bow. While playing  quick and rather short détaché one should seek ’the balancing, sautillé point’ where the bow shows the tendency to jump.

In the beginning, according to Capet, one should force it to stay on the string: ‘sautillé a la corde’. Then when the bow is ’struggling to leave the string and dance, the pressure can be lightened’, according to Hodgson, and the bow starts to jump: Capet’s ‘sautillé rebondissant’. While perfecting this bowing one can experiment with diminishing the pressure of the fingers and the wrist, transferring the weight of the hand from the first to the little finger and changing the angle or the tilt of the stick. The removal of the fourth finger from the stick can be very helpful in freeing up the hand. All these elements are important: however, a bow whose characteristics match those of the individual player is a decisive and determining prerequisite.

In playing sautillé one general and important rule to remember is that the bouncing of the bow must not be too high - the best tonal results are achieved when the bow leaves the string as little as possible. Here Flesch’s advice to aim for a quick, small detache, and consider the bouncing to be of secondary importance, is permanently valid.

Read: ‘The best medicine for string-crossing, spiccato and the right arm’ - Felix Andrievsky’s etude of choice