Double bass beginners should play in all left-hand positions

Thomas Martin pinpoints some common technical problems for young bassists and insists that beginners shouldn't be restricted to playing in the lower positions. From the May 2014 issue 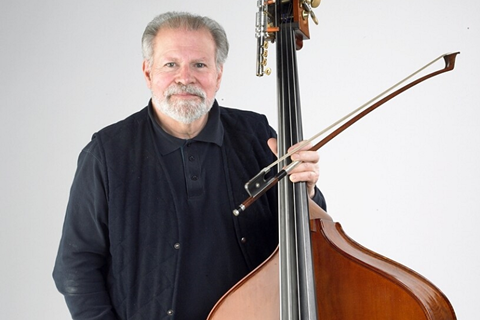 What are the most common problems you find in students looking to develop their playing skills?

Many students have had poor training before they come to college: perhaps they learnt with someone who doesn’t play the bass, or they taught themselves. I spent years teaching myself, and a lot of bad habits had formed before I found myself a good teacher.

The adjustment of the instrument is important too. I can remember when I first started I was struggling to play this thing – the strings were a mile off the fingerboard. The people who sold it to me just took it out of a box and stuck the bridge on without adjusting it properly, and King Kong couldn't have pushed the strings down. If the instrument isn’t set up properly, you’ll end up with the worst playing position you can possibly find.

Players end up weighed down by clutter: unnecessary ideas, motions and movements. When looking at technique I find that students often know some answers, but the most important thing to understand is the questions. Once they understand what the instrument wants and what they have to do to play it, things become much simpler.

What sorts of questions are most useful?

One of the first things I ask is: ‘How do you make the strings vibrate freely in two directions using something that is going in one direction?’ The answer is that if you press too hard with the bow, the string won’t vibrate freely; if you don’t press too hard, it makes a free and open sound. The string will also choke if you don’t bow parallel to the bridge. For the left hand the answer is to relax the weight of the arm, which needs to be heavy enough to power the instrument but flexible enough to allow everything to vibrate. Many students press too hard.

More advanced students should ask about the repertoire: what they need to do and which techniques they need to achieve that. With a more musical phrase, for example, they might want to use one string so that they can produce a fluid melodic line. If the music is difficult technically, they will need to move their hands as little as possible and stay in one position. The main thing is to be able to play quickly and accurately.

How can students improve left-hand speed and accuracy?

The secret is finding a good hand position. They have to position all four fingers so that they fall in a straight line along the string and the notes are under the hand, with the two longer middle fingers on their points to make them fit comfortably. Once students get the idea that they simply have to put their fingers over the notes, they’re off and running.

There are two schools of thought on thumb position. In the first, the thumb sits behind the second finger, which makes you press down hard on your first finger because there isn’t any support. In the second school, the thumb is behind the first finger. This is better because it lets you plant your hand in position and weigh down on the string using your arm, without pressing.

Weight distribution is key to the left hand. It’s amazing how little weight is required. To make students realise this, I get them to play a harmonic with their fourth finger and then to slowly press the string down until the note under it sounds. This control is particularly important for shifting.

How do you help students achieve the correct hand balance for shifting?

Shifting on the double bass is an art. Once students have control of the arm weight pressing the string down, I use an aeroplane analogy to explain balance: I pretend my hand on the piano is an aeroplane on a runway, and take off from the back half of the hand. I also land using the back half of my hand, to avoid a ‘plane crash’.

Next we go to the railway station. When the train is in the station the brakes are on, but to move to the next station you take the brakes off. With the huge shifts required on the bass, a heavy left hand is a big disadvantage. If you can move your hand lightly with the correct balance, and only put the brakes on when you reach the next note, you’ll be able to shift.

Which exercises do you use to improve shifting accuracy?

I love using etudes, particularly by Simandl and Bille: they have different musical challenges to test our technique. I take a little section and ask students to play it with at least three different sets of fingerings. This develops their technical and musical imagination, and their playing ability. The whole purpose of an instrument is to allow us to express ourselves through music. The better we can operate it, the better we can express ourselves.

Do you have any tips for teaching beginner double bass?

The concept of teaching half an instrument for three, four or five years before allowing a student to graduate to the rest of it doesn’t make sense. Many students become total experts at the low positions because that is what their teachers cover first. One student’s mother told me, before his first lesson, ‘He can play up to about fourth position.’ I told her that if he studied with me he had to do the whole thing at once. We started with three-octave scales.

It’s just as easy to learn the whole range of the double bass at once. In fact a very good place to start teaching hand position with younger people is in the middle of the instrument, because there isn’t as much of a gap between the intervals so it’s easier for smaller hands.

When I talk about hand position with younger players, I often start with the first finger on the 4th or 5th above the open string. There are lots of melodic exercises they can do in those positions. Later on, a knowledge of all the dark areas where nobody ever goes is very important on the bass – it can make the things we play twice as easy. Why not have a technique where you can play a Mozart violin concerto or a cello sonata? To learn that is very interesting.