In July 1999 Charles Noble tried to ease the trauma of facing orchestra auditions; in the August 1999 issue he introduces the extracts every violist should know 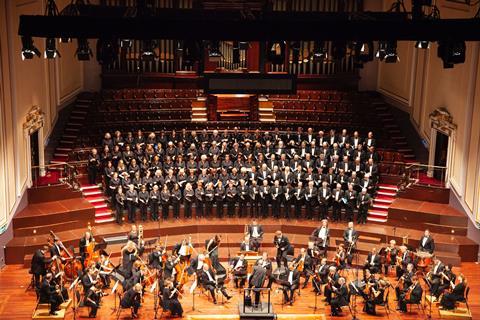 Over the years, I have collected audition lists from US orchestras encompassing the entire spectrum of budget size and artistic accomplishment. As I began looking over these materials, I became aware of some common repetitions of repertoire. The result is my list of the Big Seven excerpts which every violist contemplating taking auditions should know. Working diligently on this core of excerpts will give you the essential backbone of the audition repertoire and eliminate much of the stress from learning most orchestras’ required lists. Here are my Big Seven in alphabetical order.

The second movement of Beethoven’s Fifth Symphony is a classic excerpt. The opening theme of the movement presents a special challenge: it should be very rhythmic without becoming staid or academic (example 1). It should flow evenly with no bumps or hiccups. This section can often present problems of intonation as well as in negotiating the string crossings evenly. The second section commonly asked is at bars 49-59. Take care that the string crossings are even and that a light vibrato is constant throughout. This will ensure a flowing and even result. The same principles apply in the other two sections asked, bars 72-86 and bars 98-114. In this last section, be sure that the pp marked is much softer than the preceding p. Most often candidates will play the piano portion too softly, leaving no room to play a true pianissimo.

Berlioz’s Roman Carnival Overture presents similar challenges, but with greater melodic and dynamic ranges. The excerpt most common!}’ asked is from the E major section to five bars before figure 4 (example 2). The usual mistake is to ignore the crescendo on the first two notes of the phrase, which robs the phrase of its off-kilter beginning on the weak beat.

Often the various articulations of the dotted quaver- semiquaver rhythm are mis-played. Be sure that whatever bowing you choose does not affect the intended articulation. Watch the diminuendo from the high A to figure 3: it is likely to be accompanied by a ritardando, which is not called for in the score. Overall, beauty of tone and a sure knowledge of the somewhat unusual phrasing of this melody is what is expected.

The Scherzo from Mendelssohn’s A Midsummer Night’s Dream is the classic spiccato test. The entire piece is often asked, but the two main areas of concern are from B to D and H to L (example 3). They demand clear, pianissimo articulation and very’ exact, even rhythm, along with seamless shifting of the left hand. You must also anticipate the different strings’ varying degrees of responsiveness to the bow to achieve a constant spiccato stroke. All of this must be maintained in dynamics ranging from pp to ff, but especially at the very soft end of ones dynamic range.

A common question concerning this excerpt is that of the nature of the spiccato stroke and what is expected. This can vary. Some committees expect a very dry, secco spiccato, well off the string; others want a more rounded sound, close to the string. You can commit to one or the other, but the best option is to be ready for both and to be flexible. Flexibility is one of the attributes a committee will be looking for. This excerpt seems to be one of the most consistently challenging in the repertoire. It’s no surprise that it’s in the top seven!

One of the benchmark excerpts for agility is the Mozart ‘Haffner’ Symphony. Most commonly the outer two movements are required. If you’re faced with these movements, the more frequently asked of the two is the finale. The entire finale should be learnt, with the retransition and recapitulation being the most commonly requested extracts. The retransition is a notoriously treacherous section, which can be the ‘audition spoiler’ for many’ candidates (example 4). It demands clear articulation from the left hand and a smooth, pianissimo legato from the bow arm. A seamless, effortless impression is what is expected. Try to use as few bow changes as possible in this passage: usually just two are required, depending upon the tempo chosen. As for the opening and the recapitulation passages, try to maintain a sprung stroke that is essentially on the string and in the middle to upper half of the bow. Lightness and clarity are paramount, within the dynamic range specified.

Be sure to phrase the opening melody: it too often ends up sounding like Kreutzer! Finally, be aware of two note discrepancies in the Kalmus edition in this movement: in bar 137 the last note of the bar should be F sharp, and in bar 179 the first note should be E natural. Consult the Barenreiter part or score for other articulation changes. In the first movement, watch for these passages: bars 41-66; bars 71-96; and bars 141-172.

Ravel’s Daphnis et Chloe shows up time and again on audition lists. There are two commonly asked excerpts from this work, and both appear in the Second Suite from the complete ballet.

The first is the opening of the Suite no.2, most often from figures 158-170. It demands careful pacing of a musical line that stretches for nearly two pages. It covers a very wide short section just after figure 161 where the violas are not the leading voice. The shift in rhythmic tempo at figure 164 should be very accurate; it should not be at a different tempo from the preceding material. Above all, this is a supremely beautiful piece of music, which covers virtually the entire dynamic and tonal range of the instrument. Beauty of sound and a firm grasp of the pacing and melodic contours are the bottom line.

The second excerpt comes from the concluding Danse générale, which runs from figure 195 through to the end of the suite - be prepared to play any of the material of the upper line! The most commonly asked portions are figures 196-204 and figures 212-220. This final dance in 5/4 time is a virtuoso showpiece for the entire orchestra. The principal subject of this dance is first stated by the violas (example 5).

Choose your bowing carefully for this subject; example 5 shows the most common bowing solution for this passage. All notes must speak clearly, while the passage should be sempre pp, not rising above piano with the crescendo into figure 213. The dynamics should be clear and the articulation should be consistent throughout. The tempos for this passage vary quite a bit, from relatively sedate to scorchingly fast. Be prepared.

Shostakovich’s Fifth Symphony is stipulated most often for the ’ terribly’ exposed section solo at figures 15-17 (example 6). The difficulty of this excerpt lies in its huge melodic span - nearly four octaves - and its requirement for strict time-keeping in a slow tempo. Keep in your ear the rhythm which underlies the excerpt, the ♩ and two ♪’s, and use that as your internal metronome. Make sure that the overall line is not chopped up into too many sub-phrases, keeping the sound from tapering off at the end of the six-beat ties. Intonation is tricky coming down from the high C to the E Other passages in the first  movement include figures 22-25 and 32-39. The latter passage, in particular, emphasises endurance: the ability to keep control of tone in very long, high-dynamic passages while also keeping pitch and rhythm precise as the excerpt wears on.

The magnum opus of left-hand agility is Strauss’s monument to orchestral virtuosity, Don Juan. Learning every note of this work is highly recommended. A few orchestras may still ask mainly for the beginning to letter C, but definitely be familiar with the following passages: between G and I; from O to the bottom of the page; from five before Q to before T; letter U(l); after V to Y; and the last page - ignore this at your peril!

This finger-buster covers the entire useful range of the instrument, most often at high speed and in some awkward keys. Virtually every common articulation is present and all of them need to be played with impeccable rhythm and great differentiation. Don Juan has acquired its formidable reputation with good reason!

Bar and figure numbers are generally taken from Kalmus edition, but they will normally be the same in other editions.