From the awkward grips of the past to the relaxed approach of today, the bow hold has come a long way. Globalisation has a lot to do with it, argues John Krakenberger in this feature from February 2003 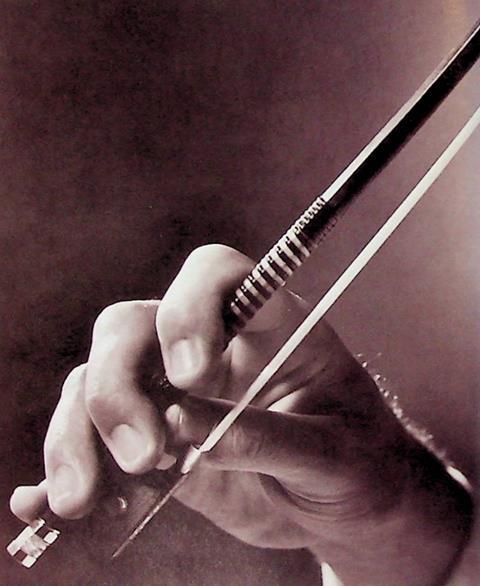 It is uncanny how aspects of violin and viola playing run parallel to the evolution of civilisation during the last hundred years. Globalisation has come to almost every area of human activity and meanwhile these activities have evolved towards greater ease, comfort and dexterity, and we constantly break new records. The distinctions between the German, Russian and Franco- Belgian bow holds have gradually diminished and by the present millennium, well-nigh disappeared.

Let us start by looking at what the distinctions were about a hundred years ago, inasmuch as it is possible to define them. The most rational approach was the German one, which was based on the notion that the fingertips are the most sensitive parts of our fingers. When you pinch yourself with a needle, it hurts more in the tip than lower down the finger. Ergo, they reasoned, the bow must be held by the fingertips, to get the maximum feedback. There was, alas, a snag: to achieve this, most hands had to bend at the base knuckles, otherwise the thumb would become too short for an efficient hold. This, I suspect, was the origin of the phrase ‘bow grip’, a not-too-elegant description which depicts the rather forced way of managing to play like this. The bend at the knuckles actually diminished the sensitivity along the fingers and the change of direction at the frog was perforce done  with rigid fingers, not a good solution at all. 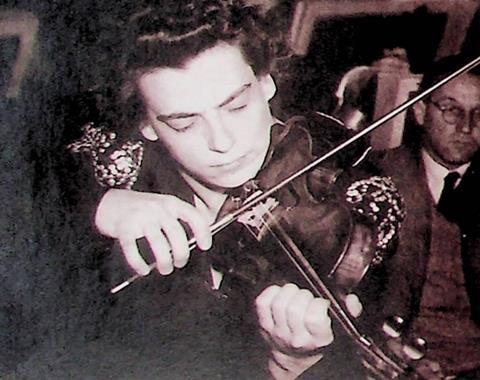 Neveu, whose spreading fingers is one element of the Franco-Belgian school

Carl Flesch tells us in his Memoirs how Joseph Joachim held his bow: ’By the fingertips, the index finger touched the stick at the line of the top joint, while the little finger remained on the stick even at the point.’ As a result, ’the change of bow at the frog was accomplished with stiff fingers by means of a combined movement, very difficult to describe, consisting of a horizontal jerk of the wrist and a slightly rotating movement of the forearm.’ That this stance was uncomfortable and must have caused tendonitis in some followers is evident.

The Russian bow grip was more inspired and led eventually towards our present way of tackling the matter. It came from a loose hand, graphically shown by Leopold Auer in his Violin School. Protruding knuckles continued to hamper complete flexibility to some extent, but this was offset by diligent work; after long practice players contrived to have a loose wrist and fingers, in spite of the rigidity introduced by an acute angle between palm and fingers. An excellent example of this was Nathan Milstein. Nobody would hold a bow like he did now, with such a tense wrist, yet his playing was as smooth and sweet as you can get. Of the Russian school, Oistrakh had short fingers which reduced protruding knuckles while Heifetz played with his hand considerably pronated. This entailed larger separations between the fingers, which until then was frowned upon. 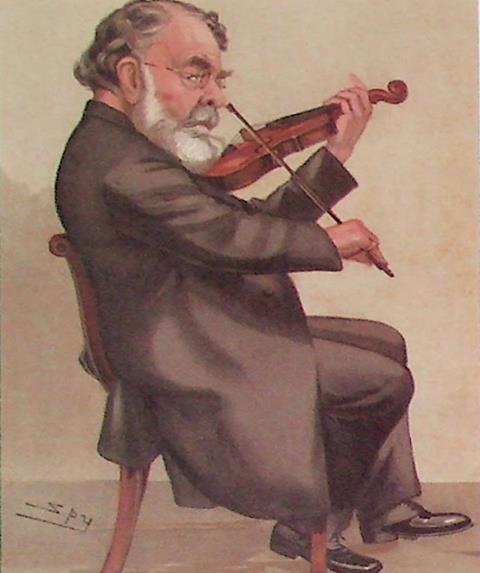 Joachim demonstrates the German grip, holding the bow by his fingertips

In his book Playing the Viola David Dalton asks William Primrose about the three bow holds. He replies: ’I must confess that I am not absolutely sure what these holds are. There is one associated with the Auer pupils, which was very marked in Heifetz’s case - something we London collegians had never seen before his advent on the scene. Heifetz’s hold appeared to lie between the second joint and the base knuckle of the first finger, with the hand strongly pronated. I take it this is the Russian hold.’ He continues: ’Characteristic of the so-called German grip is that the bow is held in the first joints of the fingers more towards the top side of the stick… It gives the appearance of one who touches with aversion something reptilian… As for the Franco- Belgian, after my discipleship with Ysaye, it seems to me that it is an extract of the best of all others.’

The Franco-Belgian hold was certainly a kind of mixture of both approaches. What particularly drew the attention was a protruding middle finger which affected the thumb-middle finger hold, permitting the other fingers to make contact nearer the last joint of the fingers or the finger tips. This hold also involved the spreading of fingers, particularly the index finger. This is clearly visible in the way Jacques Thibaud played; Ginette Neveu and Arthur Grumiaux also followed this tendency.

The evolution started at the beginning of 20th century, but since changes in instrument pedagogy are often adopted slowly, it took until after the Second World War to really get going. Both Carl Flesch and Ivan Galamian contributed to this, formulating things rationally and creating comprehensive systems for problem solving (for Galamian, the relaxation of the wrist was essential to strong sound production). Coercion was no longer the decisive factor: conviction became the big word. Of course, people also started travelling more, picking up new skills while they were abroad. This included young, gifted violinists who won scholarships and went off to discover other styles of playing. This mixture could be called globalisation.

Today’s top young violinists rarely display raised knuckles at all,  the bow hand instead hanging loosely off the wrist. Any noticeable differences are due to different hand shapes and body builds. This may mean a greater or smaller distance between the index and the other fingers and it may also mean more or less pronation to get a good thumb-middle finger axis. Generally, the distances between index to middle finger, and ring finger to little finger, are a few millimetres more than the separation between middle and ring finger. There is also a great variation in the position of the thumb relative to the fingers on the stick.

Particular consideration must be given to the thumb, the most important finger of a violinist’s right hand. It is now recognised that bending the thumb slightly at its first joint allows the thumb to bend and unbend, more bent at the frog, less at the tip. Since the tip of the thumb touches the bow at the foot of the frog the feedback this gives offsets the loss of the fingertip contact with the bow, as the thumb’s signals occupy the same space in the vortex of the brain as all other four fingers put together.

How all this works can be verified by an experiment which I show to my pupils, to demonstrate how their dexterity has improved. Put a pencil into the right hand, holding it as if it were a bow, the hand hanging down loosely from a horizontal forearm. Then have someone shake your forearm up and down, so that the right wrist moves in the same direction, as if saying goodbye. A well-trained bow hand will manage to keep the pencil in place with no problem at all, but a non-experienced person will drop the pencil after a second or two. Now do the same with your left hand: the pencil will fall immediately. The knack of holding the bow with a loose wrist is proof that our brain can achieve miracles if trained properly.

This brings us back to the beginning of the story. As homo sapiens, we can do almost anything we set out to do if we train ourselves. The bow grips of hundred years ago look to today contrived and unnecessarily clumsy and the postures seem uncomfortable and strenuous. The techniques we see then were certainly less easy than today but there is proof that the great violinists of those days played very well indeed. People were perhaps less likely to search for relief when obstacles appeared - they were used to overcoming them. Life was tough, with disease, pests, none of the comforts of modem housing or our ease of transport. For aspiring violinists, there were few recordings and no mass media to help them build their reputations.

Our approach to violin playing has accompanied the general trend of evolution also evident in sport, where new records are regularly established over time. We want to make things easier, more comfortable, more natural,  and most important of all, we are desperately looking for satisfaction. In the case of musicians this comes in the secretion of endorphines after a successful performance.

Today’s violinists are healthy drug addicts - drugs of their own body’s production. But such effects are only possible if players adopt the most natural stance; otherwise they get blocked. Violinists of a hundred years ago may have missed a lot of the kicks we get now from playing the violin and viola.

The parallel between bow-hold evolution and civilisation during the 20th century is evident. We could call it optimisation. If it affected the rest of our lives as positively, we would be lucky, but as far as string playing is concerned, we can be quite satisfied.