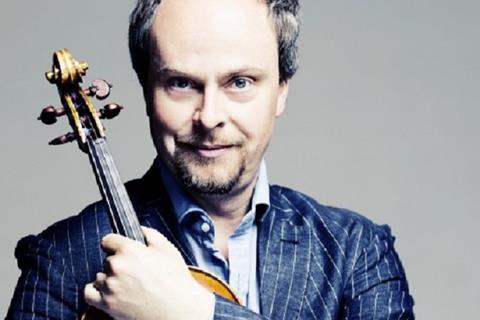 The following article is published as part of a larger Technique feature on playing chords and double stops by violist Hartmut Rohde in The Strad’s June 2017 issue, out now– download on desktop computer or through The Strad App.

When we play double-stops, we tend to think about the speed and weight of the right arm, and about intonation. Largely ignored are the set-up and balance of the left arm, which are also very important – especially on the viola, where the stretches are even bigger than on the violin.

My favourite analogy is with the human body: within a double-stop, think of one left-hand finger representing the left foot, and the other representing the right. Weight should be balanced evenly between the two, with an imaginary third string acting as the spine at the centre. We should not begin with all the weight on one side and then stretch to the second note, or release our fingers at different times. Instead we should play the double-stop as a unit, so that each feels like one hand position, not two finger positions. Imagine the sound in advance, imagine the feeling, then play – like a pianist who knows how each interval on the keyboard feels in the muscles of the hand.

Exercise 1 was put together by William Primrose, developed by my teacher Hatto Beyerle, and later amended by me. The idea is to modulate through a sequence of perfect 4ths, to set up the correct hand and arm position. It is excellent for intonation, because perfect 4ths always have to be perfect – there is no room for error! They are better than 5ths because we have to use two fingers rather than one.

To read Hartmut Rohde's full article on playing chords and double stops, including SHIFTING IN DOUBLE STOPS and TRIPLE-STOPS AND QUADRUPLE-STOPS download The Strad’s June 2017 issue on desktop computer or through The Strad App.