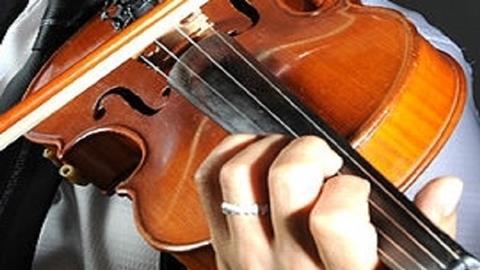 Whenever we articulate with the left hand, there can be an almost imperceptible portato in the bow: the right hand moves as we lift a left-hand finger, or as we put one down. It’s very hard to separate the two, and so we form bad habits. You can improve your coordination by using almost any piece ever written. Begin by playing the piece you are learning using just the right hand, doing all the bowings and string-crossings on open strings.

In many cases it is easier for the bow to be ready to play a note than it is for the left hand fingers to be ready on the string. The bow must always ‘wait’ for the finger to be down before the bow sounds the note. The left hand fingers always lead. If the finger is not ready, a moment of ‘fuzz’ is caused by bowing the half-stopped string. A simple way to demonstrate perfect coordination is to play pizzicato: the difference in timing between putting the finger down and plucking is then automatic.

The performance of a perfect messa di voce – swelling and diminishing a long note – requires an interplay of tensions and relaxations that exists only in a perfectly balanced, dextrous technique. To master the messe di voce, then, is to conquer technique and coordinate yourself ideally at the instrument. The string, the bow stick and hair, and the player’s arm are all flexible and resilient. Together they create a system of springs that not only withstand pressure but thrive under it.

Dont study op.35 no.6 Allegretto scherzoso concentrates on two main aspects of technique: coordination, and speed and mobility of fingers when executing trills. The more frequent mistake made by pupils working on coordination is found in the almost automatic accent placed by the bow on the last note of each group. To avoid this I recommend playing the figuration by isolating each first note. Then try to continue the bowing in a similar way, irrespective of what the left hand is doing.

The bow may easily get ahead of the fingers in fast passages because bowing actions are often more straightforward than finger action. The bow may simply be moving up and down on the same string while the left fingers have many complex actions to perform – changing shape from note to note, dropping from different heights, some being placed early on the string, some being placed after shifts, and so on.

Avoid all exaggerated, and especially all superfluous movements of the fingers: (a) No finger should leave the string unless obliged to do so; (b) Wherever and whenever a finger can take its place, before the bow has to play its tone, it should do so. The practice of deliberate anticipation and delay does not favour a want of precision in the feeling of the fingers. On the contrary, it drills them into a far finer feeling for accuracy of time then the habit of placing the fingers for the duration of their notes only; for it compels them not merely to watch the moments of coming and going for their own sake, but also to keep in conscious communication with the other fingers and with the bow as to precision in time.