Tomás Cotik: How I interpret Bach

Ahead of his 2020 album release of Bach’s Sonatas and Partitas, the violinist presents a new blog series, in which he discusses the contradictions between the opposing trends and traditions in Bach interpretation, and his personal solutions to them 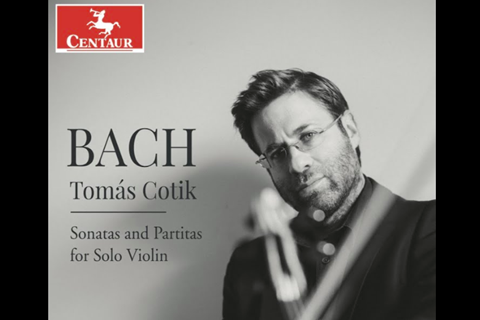 While awaiting the official release of my album of Bach’s Sonatas and Partitas scheduled for 2020, the 300th anniversary year of the composition, I reluctantly started preparing a presentation about my interpretation that, for some reason or other, I had agreed to give at this year’s ASTA conference in Oregon. In truth, I didn’t want to lecture anybody. I was very hesitant to speak about my own performance and understanding of Bach’s Sonatas and Partitas. Curiously enough, I felt uncertain in a way that I had not been when it came to the recording of these works.

Bach did not write anything about how to perform his own works. We need to rely on his contemporaries, friends, relatives, and students to try to understand the significance of the symbols and the technical and stylistic issues in these works with the goal of capturing the composer’s intention and affect of the music.

A concertmaster of one of Germany’s top orchestras once told me that he stopped playing and teaching Bach because of the conflict and contradictions between the opposing trends in performance praxis. As much as we try, it is difficult to specialize in the performance of everything. It’s disappointing to narrow our focus too much and not the best shortcut to simply ignore the information that is out there. So how do I avoid paralysis, how do I reconcile my appreciation of different performance styles, how do I live with the contradictions and the things we will never know, without resorting to—out of ignorance—the naïveté to do whatever I want? How do I circle around the fact that we tend to like whatever we are used to? I would like to share some information and a brief summary of my own present struggles, questions, and views on some of the many layers of performance and study of these pieces.

I chose to record my album of Bach’s Sonatas and Partitas with a Baroque bow. Before doing this recording, I had experimented for the last twenty years switching back and forth between a Baroque bow and my more modern Sartory bow (ca. 1893/94) when playing Baroque repertoire. Back in 2012, after listening to the sound samples while preparing for a previous recording of Bach’s Sonata in C Major, I decided on the bow to use.

I enjoyed the expressive potential of the Baroque bow, the transparent textures, and the effortlessness with which it went ’around the curves,’ changing strings and direction with ease. The ability to differentiate subtle nuances at the beginning and end of each stroke and the subsequent numerous possibilities of connection between those notes appealed to me as well.

The Baroque bow naturally helped me interpret the music and avoid undesired accents. Furthermore, it allowed for a lighter sound, quicker, more flowing tempi, and lively articulations. Since then, I have played Bach “Sei Solo” with a Baroque bow. To me, the Baroque bow feels ideally appropriate as it informs us constantly about the sound, articulation, and character of this music. It is also (together with a Baroque violin setup) the most, if not only, objective element in a HIP.

What does the Baroque bow teach us? In my opinion, it informs us that:

• Rhythmic articulation, clarity, and playing fast is easy in the lower half

• Pressure doesn’t help at all

• There is resonance between the notes. The treatises offer some additional insight in regards to the desired sound. L. Mozart speaks about the absence of the biting attack, producing the notes beautifully and touchingly, leading the bow from strong to weak, and making sure that at all times a good, even, singing and “round/fat” tone can be heard. Geminiani, Quantz, Agricola, and North all speak about the messa di voce (swelling or increasing and softening of the sound).

In these pieces, there is an immense number of repeated string crossings; many times, skipping over one or two strings. In my opinion, these string crossings don’t need to be avoided with elaborate fingerings.

The Baroque bow makes them easy and natural to play, so that there is no need whatsoever to avoid them. At the same time, this helps in staying in lower positions where the strings are longer/more resonant and keeping patterns in the sequences and differentiations in the “hidden” voices that happen simultaneously between the different strings (historically called: basso, tenore, canto, and cantino).

The written slurs in Bach seem to literally indicate bowings and articulations. They influence accents and delineate the contrapuntal structure. Most bowings can be realized with a Baroque bow. It is not a sin to change a bowing, but I always start from the original (even though there are several places where the writing is ambiguous and we don’t know what Bach meant).

Bach was a very good violinist, and received his first professional appointment as a violinist. His son, Carl Philipp Emanuel, would recall of his father: ’From his youth up to fairly old age he played the violin purely and with a penetrating tone and thus kept the orchestra in top form, much better than he could have from the harpsichord. He completely understood the possibilities of all stringed instruments.’

The slurs constitute about one third of the explicit information Bach gives us in the text. Replicating those explicit intensions with a different bowing can become more complicated than doing what’s written. Having said so, there are indeed places that do require our creativity to solve specific problems. Many treatises, such as those of L. Mozart, Nicola Matteis, and Quantz, indicate that strong notes or beginning notes of slurs/passages should be stretched in time and, depending on the possibilities of the instrument, should be played louder than the following notes.

Often written in the form of echoes, the dynamic indications in these pieces are few and far between. In Bach’s time, drastic differences between loud and soft were not as desirable, and the wide variety of color associated with the Romantic Period was yet to come. In these pieces, it is important to focus on the character, tonality, articulation, and rhythmic freedom as means of expression, all the while creating a resonant and clear sound.

There are so many ways to play the chords. Let’s start by saying that the notes in the chords don’t need to be played simultaneously nor need to be literally sustained for their full value. We have to be aware of how other instruments (e.g. harpsichord) would roll a chord as well as the unintentional rhythms that can be created when we break a chord.

I mainly use different variations of arpeggiated/rolled chords (both down-bow and up-bow). I never roll the chord from top to bottom or go from the bottom to the top and back to the bottom (via strings crossings) to underline a more “important” line. I find this instrumentally awkward and trust that the listener will still grasp the line without resorting to this artifice.

Bass lines hold an undeniable importance in Baroque music. Besides helping to highlight their inherent function, I also always give the bass notes considerable weight because they project less than the notes on the higher strings.

Written values don’t always need to be held literally. Even in independent parallel voices that have the same rhythm simultaneously, a differentiation in rhythm or a variation in dynamic could help bring out the distinct identity of the lines. Sometimes it’s not necessary to sustain long bass notes. It is enough to make the listener merely believe and remember the continuation of the line without literally holding the notes out for their full values.

In “moto perpetuo” movements, we can elongate or accent notes to bring out different voices and create the illusion of continuation in voices that don’t appear literally sustained in the text. This way, the notes can surge like stars form a constellation, pointing at the hidden polyphony.

Keep a lookout for next week’s article, in which Cotik discusses violin strings, intonation and vibrato