5
How I interpret Bach: Tomás Cotik on Ornaments, Trills and Appoggiaturas
Playing Hub

How I interpret Bach: Tomás Cotik on Ornaments, Trills and Appoggiaturas

Bach’s score has much more detail than what was customary in the works of other composers from that time. The first movements of the first and second sonatas are good examples that show that Bach wrote down the “improvisations” and ornaments that his contemporaries would have expected the performer to improvise.

Suspensions, appoggiaturas, notes echappees, passing notes, and trills with their resolutions are often spelled out in the text. In fact, it is a good exercise to start by crossing out passing notes and ornamental filling notes to understand the structure and “essential” columns of this music. Often times, the structural notes will be on stronger beats.

Bach’s contemporary Scheibe even criticized that “by writing out ‘every ornament….that belongs to the method of playing’ [Bach] obscured the basic outline’” of the music.

It could be reasonably argued both ways that Bach either provided the text fully or that improvised embellishments by the performer are appropriate additions. While I refrained from adding additional ornamentations for my recording, I did occasionally add cadential trills and in live performance sometimes will add some turns.

It is important to also keep in mind that slurs, tempo rubato, notes inégales, and phrasing are a form of ornamentation and add to the improvisational character of the music even when they do not add any literal notes to the original text.

Below is a table given to Wilhelm Friedemann Bach by his father, which shows how Johann Sebastian seems to write out the ornaments as notes in these works:

Read: 7 ways to improve your trills

Read: ‘I look up to the ceiling and suddenly notice the stucco’

Read: Baroque music was invented in Italy – and spread like wildfire

The execution of trills depends largely on their context. Most often, they are to be played on the beat, starting with the upper note. If approached from the step above, trills should be played on the main note in fast tempi and on the upper note in slow tempi. If approached from the note below, it was customary to fill in a passing tone. These are generalizations, and there are, of course, exceptions. On slow notes, it was customary in French music to start the trill slowly and then to increase the speed. Thankfully, most trills and their endings are written out by Bach in the slow movements.

Couperin, CPE Bach, Jean Rousseau, and Rossi: Ornaments are needed and appropriate for expression but should not extravagant. 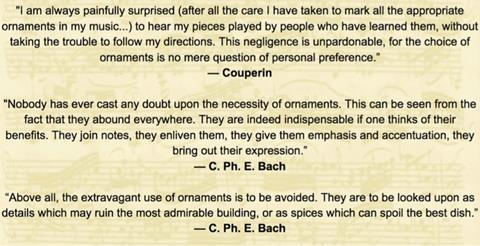 As Quantz writes, appoggiaturas “are not only ornaments, but necessary elements. Without them the tune would often be very dry and plain.” Leaning on certain notes, particularly dissonances, is characteristic of this music. Appoggiaturas are mostly written out in these works as notes. Only a couple are written as true “appoggiaturas.”

In his next instalment, Cotik focuses on the context of the composition of Bach’s Sonatas and Partitas for Solo Violin, the title ‘Sei Solo’ and Editions.