Isabelle Faust on how playing period instruments has improved her bowing 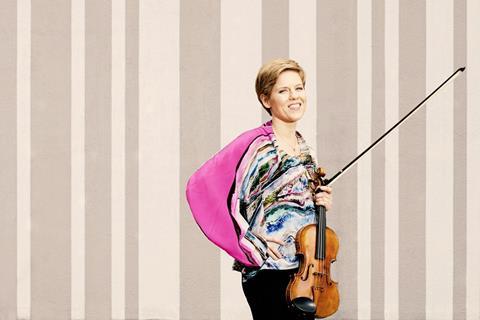 This is an extract from the cover story of The Strad January 2019, in which Isabelle Faust discusses her new Mozart Violin Sonatas album. To read further, download the issue on desktop computer or via the The Strad App, or buy the print edition

One facet of Faust’s playing that produces such nuances, such freshness, is her bowing – she has an unusually active, flexible right arm. Why is that so rare?

‘I am lucky that I had a wonderful teacher. But I see that in schools today the right hand is not developed as much as it should be,’ she explains. ‘It should be a normal thing, that you give a lot of importance to articulation and you make your bow as expressive and as rhetorical as possible.’

Getting to know period instruments over the last two decades has extended her bowing technique. ‘Of course, if you go into the period-instrument field that’s the first thing you’re forced to learn. It has to do with exploring the style of Baroque music.

‘In modern violin teaching, expression always means a lot of vibrato and left hand – also a nice legato from the right. But it somehow stops there. 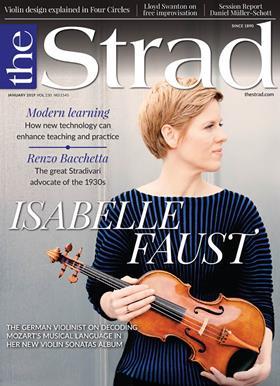 In her January 2019 issue interview, Isabelle Faust talks about how her new album of Mozart sonatas has brought her face to face with the enigma of the composer’s musical language

‘That would be alien to someone like Mozart, or even later composers. Vibrato in Baroque times was used just for ornament, and it would be used occasionally to give sparkle to a special note – a long note, for example, or a very sticking-out note. But the real work would be in the articulation and in the tension and the relaxation, and that comes from the right hand.’

She says the choice of bow is also crucial when differentiating between styles, and even violins. ‘Bows are very often underestimated. You were commenting on my right arm, and that goes together with the bow. It’s extremely interesting how one instrument can sound different from one bow to the next.’

So which bow is Faust using with her trusty Stradivari on the Mozart sonata recordings? ‘I’m using a beautiful original classical Tourte bow, which makes all the difference to me. It has the most noble and rich sound of all my period bows – others are copies, which is the normal case for Baroque bows because the wood eventually gets tired and breaks. Original ones are very rare, and I’m lucky to have a friend who lends it to me for certain occasions.’

She has had the ‘Sleeping Beauty’ Strad since 1996 – for most of her adult life. ‘It’s a wonderful instrument and I know it so well. I tend to say we know each other so well – it feels right to talk about it like that!’

This is an extract from the cover story of The Strad January 2019. To read further, download the issue on desktop computer or via the The Strad App, or buy the print edition