Geared pegs: why isn't everyone using them?

Geared pegs have their advocates and detractors but, as Tom Stewart finds out, the innovation has benefits for a broad range of players, from young students to seasoned professionals

This article is from The Strad’s Accessories 2018 supplement, available with the June 2018 issue - download on desktop computer, via the The Strad App, or buy the print edition

Watching the ease with which the double bassists in his orchestra tuned their instruments, cellist and Pegheds geared pegs inventor Chuck Herin first began to think about the possibility of an alternative to traditional wooden friction pegs. ‘The machine heads fitted to the pegbox of a double bass operate using worm gears, which allow the strings to be tuned more accurately and with less physical effort,’ he says.

‘I was jealous! Violinists, violists and cellists all rely on the friction of wooden pegs against the pegbox to keep their strings in tune, but that friction can make it very difficult to tune quickly and precisely.’

Others before him had a similar idea. In the 1970s, pegs made by the Italian manufacturer Caspari allowed the amount of friction to be controlled with a screw – the player could reduce the friction when tuning and then increase it again afterwards to prevent the pegs from slipping. But these pegs required bearings to be fitted permanently inside the pegbox and, with time, their mechanical components wore out, leaving the pegs susceptible to slipping and their owner facing a hefty bill for having ordinary pegs reinstalled.

Although they were popular for a time, especially among students, the Caspari pegs were quickly passed over and standard low-tech friction pegs once again became the only option, much as they had been for hundreds of years. 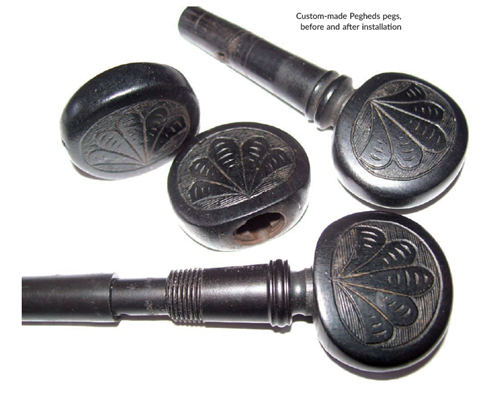 These days, pegs made by Herin or brands including Knilling and Wittner feature gears concealed inside either the wooden handle (or ‘grip’) or inside the plastic/aluminium shank itself. These gears wind the string at a ratio of 4:1 or 17:2, depending on the model, allowing for much finer control than is possible with traditional friction pegs.

Bruce Perrin, managing director of distributor Barnes & Mullins, was the first to introduce geared pegs to the UK market. ‘Tuning,’ he says, ‘isn’t just a case of turning the peg – you’re turning, pushing and pulling, often with quite a lot of force. The wrist isn’t built for the motion, and over time it’s easy to damage it.’ By eliminating the strenuous and unpredictable action of turning the peg against the pegbox, geared pegs require less physical force and reduce the difference turning a peg makes to a string’s pitch by a factor of either four or eight and a half. 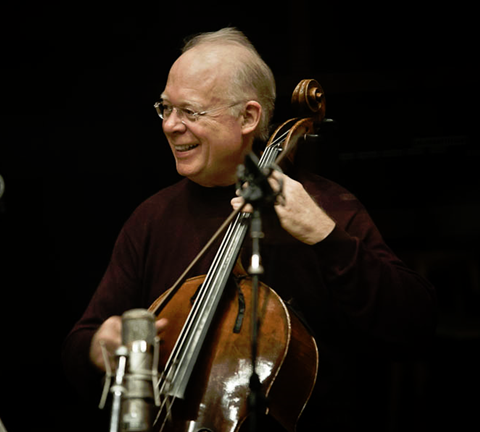 As well as improving accuracy, the modified physical action of geared pegs makes them suited to players with limited strength or mobility, including older people and young students. And with shanks made from plastic or aluminium, geared pegs are immune to the changes in temperature and humidity that can cause pegs to seize with the changing seasons and, for some people, require a twice-yearly trip to the luthier.

Despite the advantages they appear to offer, geared pegs are, however, far from ubiquitous. This might have something to do with the fact that their increasingly discreet appearance makes them difficult to spot, but also with a tendency among some luthiers (and performers) to reject modern solutions to historical problems.

‘The string world can be a reactionary one,’ says cellist Lynn Harrell, an enthusiastic advocate of geared pegs since he first tried them more than five years ago. ‘People stick with the same rosin they used when they first started out, and the same brand of strings they’ve been playing on for decades, without taking into account the revolutions that have taken place in materials science.’

For some luthiers, the ultimate goal is to build a ‘perfect’ copy of a celebrated Old Italian instrument, a goal that may explain their reluctance to embrace fittings made from materials other than the traditional kinds of wood, or which include mechanical parts. 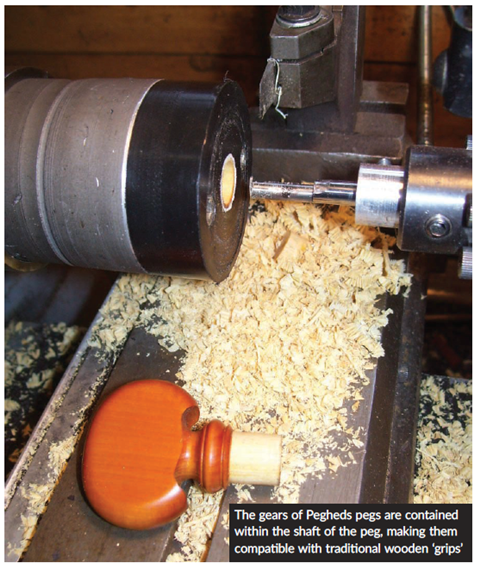 Also, in the same way that every instrument is unique, so too is every pegbox and every peghole. Although luthiers tend to buy pegs, rather than making them in the workshop, they customise each one according to the instrument’s measurements, starting with a peg slightly wider than the respective hole and shaving wood from the shank as required.

‘Since the shanks of geared pegs are made of plastic or aluminium,’ says luthier Philip Ihle, ‘we aren’t able to trim them during fitting. They come in sets with particular diameters so we need the right set for the right instrument, which means either carrying a lot of stock or waiting each time for the pegs to be delivered.’ But if the measurement of a peghole does not correspond with that of any available geared peg, the hole will need to be ‘bushed’ – a short piece of dowel glued inside it and a new hole drilled through at the desired diameter.

Understandably, many players would balk at the prospect of having their instrument altered in this way, but the reality is that peghole bushing is nothing out of the ordinary. ‘I would estimate that maybe 98 per cent of all Stradivaris will have had at least some of their pegholes bushed,’ Ihle adds, ‘and properly executed repairs to the pegbox are not considered damaging to the instrument.’

Much more familiar than the geared peg is the sort of fine tuner that is often built into tailpieces – especially on student instruments – to provide an easier means of quick and accurate tuning. Unlike geared pegs, however, these have a demonstrably detrimental effect on the instrument’s tone. ‘The extra weight a fine tuner adds to the string muffles its sound,’ explains Ihle. ‘In terms of tuning, they work quite well for higher-tension strings, and many violinists use one on their E string. Lower-tension strings, such as the G and D on a violin, require so many turns of the fine tuner that it ceases to be useful and works only to restrict projection.’

‘I’m amazed more musicians don’t switch to geared pegs, if only to save the wood of their pegbox’ – Lynn Harrell

Few luthiers carve their own pegs, their workshops often lacking the lathe required to do so, and alongside Ihle’s point that significant changes to the pegbox are an accepted part of instrument maintenance and repair, the fact that the vast majority of luthiers buy in their pegs from specialist fittings suppliers would suggest their impact on an instrument’s sound is negligible at most.

‘Although I have one or two clients who think their pegs do influence the sound of their instrument, I’m not so sure,’ Ihle says. 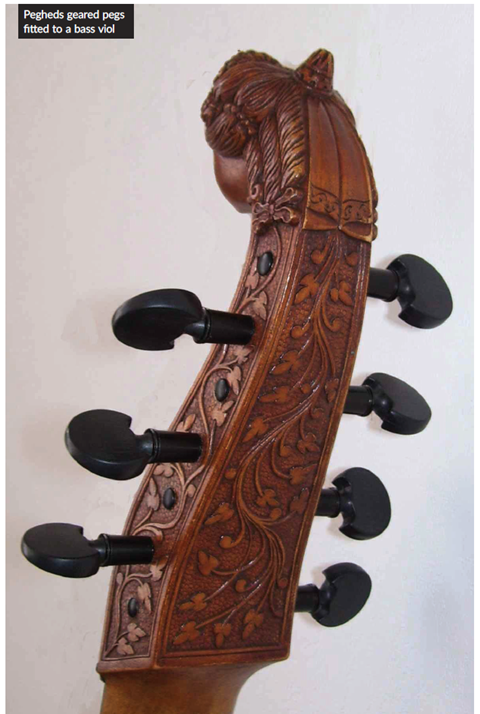 Although his company offers to fit geared pegs to its student violin outfits, Perrin suggests that costs can prove off-putting for some. ‘Yes, £65 for four pegs is quite a lot of money for some people,’ he says, ‘and takes the cost of our £180 student outfit to about £240. You would struggle, however, to buy a decent starter version of most instruments for less than that.’

Herin is currently working on a version of his Pegheds geared pegs that would allow them to reach a wider market, from the youngest student to the most exacting professional. ‘Traditional pegs are simply pieces of wood and so can be made in any size, but the same isn’t true of geared pegs, which are limited by the size of their internal mechanisms,’ he explains.

‘Right now I’m looking for gears even smaller than those I currently use, which would allow me to create geared pegs for 1/8- or even 1/16-size violins.’ Such a miniature version would also be a solution for those who object to geared pegs on account of their appearance, as Herin explains: ‘This smaller mechanism could be inserted inside a standard wooden peg, meaning there would be absolutely no aesthetic difference between a geared and a traditional peg. It would even be possible to include the kind of elaborate carving commonly found on the pegs of some pre-modern instruments.’

Until it becomes practical to manufacture gears small enough to fit inside a traditional peg, however, Herin will continue to employ a complex system of oxidation that allows him to colour the aluminium shanks of his pegs to match their boxwood or rosewood grips.

The increased popularity among luthiers of certain new materials has had much to do with the restrictions placed on the use and transportation of various natural products by the Convention on International Trade in Endangered Species of Wild Fauna and Flora (CITES) legislation. For example, a shortage of pernambuco wood used for making bow sticks has led to some acceptance of high-grade carbon fibre as a satisfactory alternative.

‘There’s a strong possibility,’ says Perrin, ‘that the law will expand to cover ebony and other slow-growing, short-grain woods of the kinds from which tuning pegs have traditionally been carved.’ The plastic and aluminium alternatives offered by geared pegs may soon, therefore, become unavoidable.

According to Perrin, however, resistance is likely to be strong. ‘Anything non-traditional in the lutherie world is like the Antichrist,’ he says. ‘Whatever it is, there will always be someone saying, “Oh, well Stradivari wouldn’t have liked that!”’As evidence of the need for change (and its eventual acceptance) he gives the example of instrument necks, almost all of which were lengthened in the 19th century to accommodate the higher pitches and playing positions demanded by increasingly virtuosic repertoire.

‘People just don’t worry about that any more,’ he says, ‘and in fact I can see no reason why, had geared pegs been available 300 years ago, Stradivari himself wouldn’t have fitted them to his own instruments.’