How to make a five-string viola

The five-stringed viola represents a creative and technical challenge for both players and luthiers. Ariane Todes talks to some of the people who are exploring its exciting possibilities 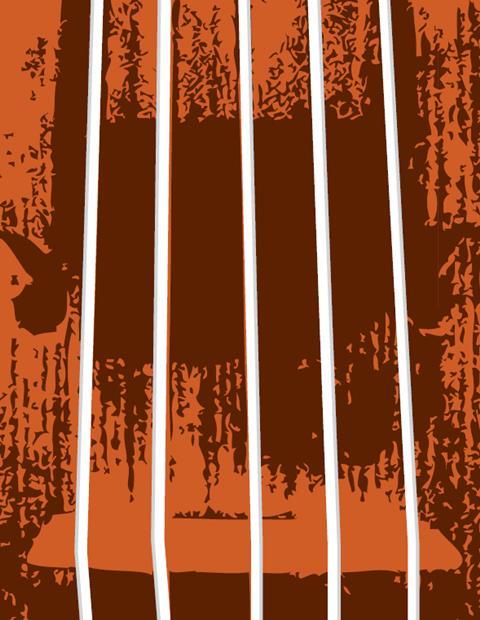 There’s something thrilling about the current rise of the five-stringed viola. In a world where violin makers work to regular specifications, often trying to recreate classic forms, five-stringed instruments represent a new frontier for players, composers and makers. Freed from the shackles of form, more and more luthiers are innovating, experimenting and refining their own take on this hybrid instrument, which, as neither violin nor viola, offers unique challenges. This development is largely driven by players – whether it’s classical violinists and violists who want to tackle the standard canon with a different tool; contemporary music players extending the repertoire; or jazz, world and folk players wanting the best of both violin and viola worlds without having to bring two instruments to a gig.

Paradoxically, all this innovation isn’t actually new. Luthier Jonathan Cooper, who has specialised in five-strings, sees it as a return to a time when instrument form was more fluid and experimental: ‘There were people making five- and six-strings back in the 18th century. It was the point at which we went to four-strings and eliminated a lot of the other instruments that we cut off those roots and possible evolutions for the instrument.’

Now, as then, luthiers are responding to players’ demands, he explains: ‘Historically, violin making has been a collaboration between makers and musicians. We don’t exist in separate worlds and we have to respond to what musicians seek. People have been venturing into different areas with the violin in the last 30 years.’ Fiddler Darol Anger, who has played various five-strings and made his own, sees this diversity in its historical context: ‘As working string musicians gradually move away from Western European symphonic jobs to other contemporary and traditional musics, standardisation is again becoming less and less important, and soloists and small group players look for instruments to fit their more diverse needs.’

Classical players are also driving demand, though. Luthier Luc Deneys was inspired by violinist Jenny Spanoghe: ‘One day we were in a restaurant and she was saying that her husband, Jan Van Landeghem, was writing her music that goes lower than normal on the violin. She asked, “Is it possible to have a C string? Will you try?”’ Deneys’s explorations with getting the right size hark back to a time when instrument development went hand in hand with composers’ demands: he started with a 15½-inch length to make it easy to play the high E-string notes in Van Landeghem’s compositions, although he then also made Spanoghe a 16-inch model, of which he says, ‘It has a round sound, but it’s too big to play this modern music.’

Violist Pierre Henri Xuereb commissioned maker Friedrich Alber for an instrument on which to play Paganini’s Sonata for Grand Viola, which was originally written for a five-stringed viola. He says, ‘Paganini called it a “grand viola” but it was a viola with an E string and I read that he played the piece only once, in London, He got a bad review, which is probably why he withdrew the idea – the only bad review he ever received.’ Xuereb has also used it for Bach’s Fifth Cello Suite and the transcribed Brahms Clarinet Sonata in F minor, but hopes that more composers will take on the challenge: ‘Composers don’t know the instrument so they don’t write for it. We need them to be interested in its possibilities: for example, you can make triple-stops easily and combinations going from very high to very low. Composers are afraid that their pieces will only be played once because there aren’t that many of these instruments.’

Alber sums up the issues of making a five-string: ‘The challenge is to make an instrument as easy as possible to play for the left hand, with a bridge curve, string spacing at the bridge and width of bouts adapted for easy bowing; all this with a full, warm viola sound and a brilliant “violin” E string.’ Playability is key for players, and size is an important area of compromise. Anger says, ‘Some of these instruments are fairly big and for a small person it can become a wrestling match. Conversely, necks can be too narrow, and the strings too close together. I like a bright-enough C string, a solid, powerful E string, and a relatively mellow tone. Most five-strings sound a little muted compared with a standard instrument, although something about the fifth string tends to even out the volume between the strings.’

For those who balk at the size of a viola, five-strings do come in violin form, but according to luthier Martin Brunkalla, who makes both, this inevitably compromises the sound: ‘Just adding a C string to an instrument designed for four strings is unlikely to satisfy a discerning player. Aside from the mechanical issues, the body of the violin was never intended to respond to frequencies lower than those produced by the open G string. Typically, the C string on a converted four-string will take more effort to get moving, and sound flabby once it does respond.’

Sacrifices must be made, according to Alber: ‘Either you want a violin with an extra lower string, which usually has a slightly weak C string, like a ¾ viola; or you want a viola with really low viola sound with a nice E string on top. In this case you need a bigger sound case, and longer string length, but it will always be a bit more difficult to play.’

Cooper’s solution to this dilemma is to use a Guarneri ‘del Gesù’ model: ‘These instruments start out with a strong core to the sound and have the potential to translate to modern playing. So I took that model and altered it. You have to make a number of physical adaptations, and not just stick another peg on it. You have to go back and look at all the parts because they work differently.’

Brunkalla bases his instruments on the 16¾-inch ‘Tertis’ model that the viola player devised with luthier Arthur Richardson from his own Montagnana. Brunkalla says, ‘My own “Tertis” model five-string viola is smaller at 15¼ inches, but retains the basic proportions of the original. I chose this design primarily because the ratio of body length to internal volume was the highest among the models of which I was aware.’

Wendy and Peter Moes made their first five-string for jazz violinist Frank Wunderer. Wendy Moes explains what he was looking for: ‘He wanted to have everything – the C string and the E string.’ Like Cooper, she recommends going back to basics: ‘Once you start thinking about what you have to change for the fifth string it turns out to be everything, except for the ribs – for starters, the outline. You have five strings, which make for a rounder bridge. You can’t be too wide in the middle bouts so you don’t have bow clearance. There’s also much more pressure on the back and the top and there’s no way to calculate this because every piece of wood is different, so you have to make sure it’s strong enough.’

Strength is a key factor for luthier John Silakowski, who says, ‘Many builders want to get the wood too thin. It is better to build a five-string heavy enough that it will be structurally sound and continue to get better and better with time. An instrument that is too thin will often sound great immediately, but then quickly lose its good qualities, whereas an instrument built with proper calibrations will never stop getting better.’ He also uses a ‘del Gesù’ model – the ‘Cannon’ – and says, ‘Finding the right-sized pattern helped me get the E string to sound solid enough to match the G and C strings. When I slightly expande