For most teachers the feeling of clumsiness associated with beginning an instrument from scratch is a distant memory. With the help of Grade1athons, however, it can all come flooding back, as violin tutor Naomi Yandell describes 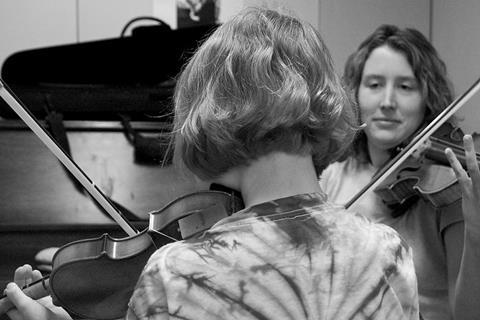 A short time ago, when my niece was four or so, she picked up her 1/16-sized violin and scraped away flamboyantly. After a minute or two she turned to my violinist brother and asked indignantly, ‘Daddy, what’s the matter with my violin? It doesn’t work properly!’

While lots of teachers understand what their students go through when starting a new instrument, it’s all too easy to forget how frustrating the initial stages can be. We know the sorts of issues that tend to come up and are used to smoothing the path, but as to how it feels to be a learner, that memory has often faded in the mists of time. My empathy gene received a sharp reminder when I, with 200-plus musicians, took part in a ‘Grade1athon’.

For those readers unfamiliar with the grading system, Grade 1 is the first of eight grades. These are one-to-one exams that students may take on their learning journey (not that everyone always takes every grade). Exam candidates are assessed on their ability to play three chosen set pieces. They are then examined across a range of supporting assessments, which may include scales, sightreading, aural tests, improvisation and musical knowledge.

Grade1athons in aid of charity have become increasingly popular among music teachers and professional performing musicians. They differ slightly from event to event but essentially the challenge is to learn, from scratch, an instrument that is brand new to the musician – in my case the clarinet – and to take a Grade 1 exam on said instrument within a certain timeframe.

My hands felt clumsy – I was all fingers and thumbs

In our Grade1athon, we had one group lesson from an expert, followed by nine weeks on our own to pass the exam (set by Trinity College London). Our tutor showed us how to assemble our clarinets and coax out a sound – and, oh dear, what a sound it was! Then we were given practice tips designed to sustain us. The words that I heard used most often among my fellow musicians were ‘enlightening’ and ‘terrifying’, but also ‘informative’ and ‘thought-provoking’. I found myself casting my mind back to the lesson. How exactly did our tutor say to put the clarinet together? Was I handling it too roughly? My hands felt clumsy and incompetent – I was all fingers and thumbs.

With my teacher’s hat on I knew that I should practise daily and that this would result in increased control and stamina. But I hadn’t factored in the frustration of my success fluctuating so wildly. Some days were just so much better than others – and if the previous day’s practice had been a disaster, motivation became a problem. I tended to start with something relatively easy and work from there towards tougher territory. I was frustrated that I made mistakes when I thought I’d hard-wired a fingering. Random blanks seemed to come from nowhere. I felt vulnerable. I felt a need to manage expectations. My advice to myself to visualise success was tricky to maintain – especially with the background knowledge that my cello students were curious and supportive but watchful.

Reliable sound production was always an issue. I knew in my head what I wanted to hear, but I was often either late because the note didn’t sound on time, or the reed would squeak. To help with this I attempted to think forward, focusing on what was to come. I think this is what got me through. (Yes, I passed.) My reed squeaked horribly in a couple of places and the focused sound that I had managed in my practice sessions ebbed rather more than it flowed.

However the experience was fascinating. I was taken way out of my comfort zone, as are my students on a regular basis. I realised, too, how much better equipped I would have been had I received weekly tips from a good teacher rather than the one (albeit excellent) lesson at the start – which, to a teacher giving lessons once a week, is reassuring.