Tim Homfray hears a performance of Shostakovich, Haydn and Smetana at London’s Wigmore Hall on 18 September 2022 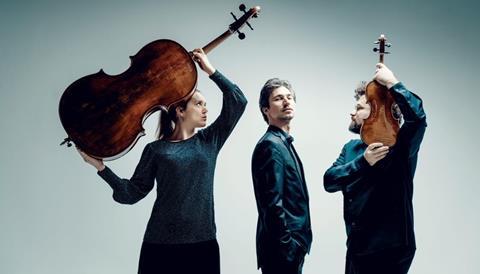 Trio Gaspard captured all the many facets of Shostakovich’s First Piano Trio, from its early vehemence, sublime repose in the cello melody to the big ‘Hollywood’ finish. The first movement of Haydn’s C major Trio Hob.XV:21 was sprightly, fast-paced and rhythmically pointed, with violinist Jonian Ilias Kadesha wielding his bow energetically. This was followed by a graceful and shapely reading of the Andante molto, with warm legato from Kadesha and intense sound, while the final Presto was taken at a gleeful sprint, with a quirky violin cadenza which drew smiles from his colleagues. Altogether, an exuberant exhibition of vitality.

In the opening of Smetana’s G minor Trio op.15, written in the aftermath of the death of his beloved daughter Bedřiška, Kadesha was intense and keening on the G string, and produced more vibrant solos in the heights; the muscularity of the playing here created an emotional maelstrom that was vivid and raw. The second-movement Allegro, ma non agitato danced, with the Alternivo sections creating contrast – in the first the violin was light and fluid, in the second there were fierce dotted rhythms. The players drove hard in the finale, balm arriving in the second subject, with exquisite and tender playing from cellist Vashti Hunter. There were many emotions on display in this performance, the predominant one being tragedy.

Review: Smetana: String Quartets: no.1 in E minor ‘From My Life’; no.2 in D minor