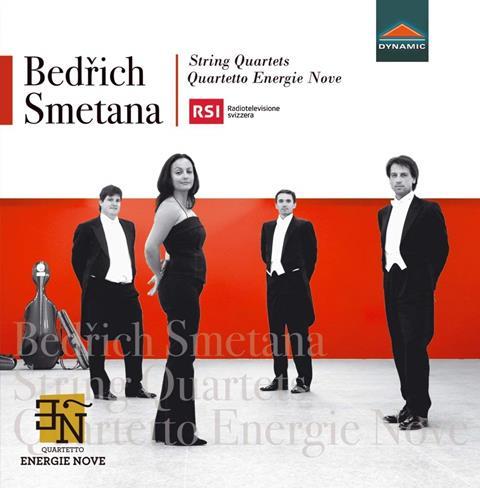 The Strad Issue: October 2018
Description: All the intense emotion and energy one could wish for
Musicians: Quartetto Energie Nove
Works: SMETANA String Quartets no.1 ’From my Life’ & no.2; Comedian’s Dance, Polka (The Bartered Bride)
Catalogue Number: DYNAMIC CDS7817

‘Utterly compelling’ wrote Julian Haylock of this Swiss quartet’s Prokofiev disc (reviewed January 2013). The same words – and more – come to mind when listening to this neat assembly of Smetana’s quartets either side of two snippets from The Bartered Bride.

But it is anything but polite. The opening chord of ‘From My Life’ will make you jump out of your skin if the volume setting is anywhere above low. An intense and deeply moving performance ensues, and immediately the first theme of the opening movement is presented as if it has been torn from flesh.

There is more than intensity here. The shape-shifting polka of the second movement is played with freedom but exceptional ensemble unity. The emotional layers in the Largo run deep, right from the opening cello solo, played with sadness yet fortitude by Felix Vogelsang.

The finale bursts with joy but the sense of pain wrought by that high E – Smetana’s railing against his deafness – is pitched perfectly. By the time of his Second Quartet, Smetana was losing his mind as well as his hearing.

The challenge in this fragmentary work is in switching between languorous legatos and jagged staccatos but giving the impression of a unified whole. Mission accomplished.

This performance is beautifully paced and imbued with the spirit of the dance. It gives the impression of an interpretation long marinated. What can be said of the quartet’s sound – edgy, steely, but warm – can also be said of the recording. This ensemble is well named.