Francesco Rugeri was one of the most important cello makers in Cremona, and one of the most prolific. His surviving output from the few decades of his known working life more than matches the total number of cellos made by the entire Amati family, and is eclipsed only by the prodigious number made by Stradivari over a period spanning more than 60 years. Cellists outside Cremona in the early 18th century are more likely to have encountered one of his instruments than any other. Dextra Musica owns three beautiful examples, all undated but attributed to 1680–90.

Although made from relatively plain materials, this poplar-backed cello is a characteristic example. It is clearly very similar in form and modelling to Amati patterns, and copied very closely, although we are not sure whether Rugeri was personally apprenticed in the Amati shop. The most distinctive feature of Rugeri’s work is the scroll, which is slender but deeply cut and finished with a most delicate chamfer. The craftsmanship and finish are both exceptional, and reflect the sophistication of the Cremonese approach to instrument making which has defined the tradition of lutherie in that city to this day. 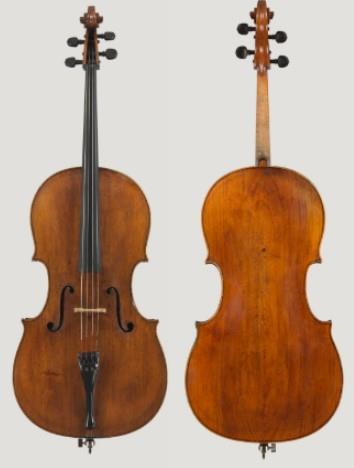