The ‘Rivaz, Baron Gutmann’ is a powerful instrument, made from a beautiful single piece of deeply figured maple

The ‘Rivaz, Baron Gutmann’ is a very fine Stradivari, whose history can be traced to the Midlands of England in the late 19th century, and its first owners a Mr Payne of Coventry, and a Mr Fletcher of Birmingham. Its title, however, comes from a wealthy London family, city stockbrokers with roots in the Vaud region of Switzerland. From the late 18th century the Rivaz family were central to an informal society of amateur players in the City of London. They owned and played a number of distinguished Stradivaris, including the 1684 ‘Marylebone’ cello, the 1696 ‘Spanish Court’ decorated viola, and the c.1700 ‘Dragonetti’ violin, with which this instrument has been confused in historical accounts. In 1864 Alexander Rivaz bequeathed this violin to Joseph Joachim, whom Rivaz admired after his London debut in 1844. Joachim is associated with several Stradivaris on which he made his career, notably the 1715 violin that bears his name, but he relinquished the ‘Rivaz’ some time before he acquired the later instrument in 1886. It subsequently passed through the hands of several dealers to the Austrian industrialist Baron Maximilian von Gutmann in 1922, before being taken to the US by Emil Hermann. It remained in the hands of various collectors there before its acquisition by Dextra Musica in 2016, and it is now played by Eldbjørg Hemsing.

It is a powerful instrument, made on Stradivari’s ‘PG’ mould from a beautiful single piece of deeply figured maple, with the top marked with an unusually prominent hazel figure on the bass side. The rich varnish is remarkably intact, and the instrument is altogether a remarkable example of Stradivari’s mature ‘Golden Period’, and a fascinating contrast to the slightly earlier and still relatively Amatisé ‘Arditi’. 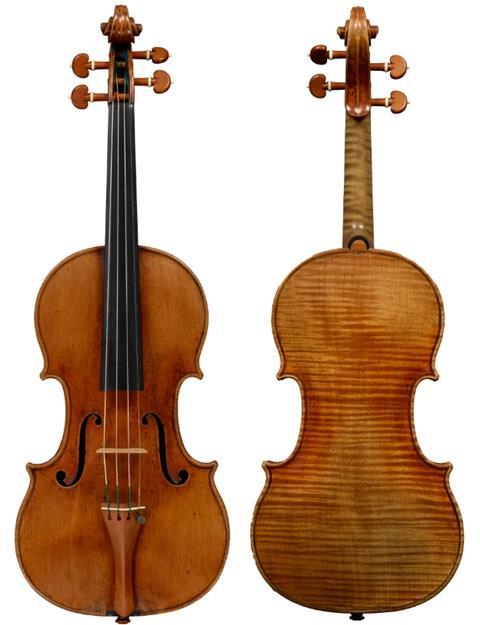