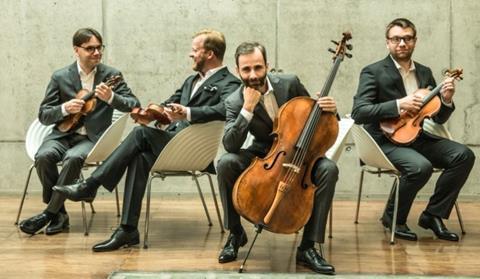 Performances abounding in strong characterisation from the Zemlinsky Quartet

After the disquieting opening of Mozart’s ‘Dissonance’ Quartet K465 the Zemlinsky Quartet scampered along, passing streams of sparkling semiquavers to each other. There was an urbanity to its playing, which gave way to fervour, with the players sometimes rising from their seats at crucial musical moments. In the Andante cantabile the musicians constructed arcs of narrative and produced a suitably veiled tone in the suspensions over the cello semiquavers. After the finely crafted elegance of the Menuetto (with the cello’s open C left ringing at the end) the Allegro molto finale had Haydnesque touches of humour, with surprise dynamic shifts and tiny hesitations before a phrase’s repeat, teasing our expectations.

In the opening Allegro ma non troppo of Dvořák’s E flat major Quartet op.51 the Zemlinsky players swayed with the opening arpeggios and bobbed up on the accents. The gracious, sparkling dance which followed had much to delight, with apt touches of rubato and portamento. The melancholy manner in which the first violin (František Souček) opened the ‘Dumka’ second movement was gently echoed by violist Petr Holman, and there was a hint of swing in the energetic Vivace. The Romanze was poised and affectionate, the finale nimble and floating.