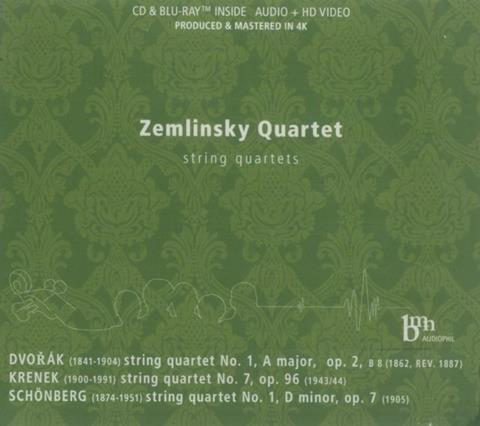 Dvorák’s delightful First Quartet, a rare survivor from his early years that he didn’t try to suppress, gets a tender yet vivacious performance from the Zemlinsky Quartet in this live recording. And the players negotiate the grittier world of twelve-tone Krenek with equal persuasiveness (this music is closer to Berg’s idea of serialism than to the more dogmatic Schoenberg). The highlight of this release, though, is their expertly paced and technically skilled account of Schoenberg’s op.7, which, although slower overall than most performances, never feels sluggish and combines purpose with momentum and structural coherence.

The production of this release leaves more to be desired, however: non-Blu-ray owners beware that the outer packaging hides the fact that the Schoenberg only features on the video disc, being too long to fit alongside the Dvorák and Krenek on the CD. The Blu-ray itself is a clinical, fixed-camera film of the performances of the three works with dryish stereo sound (the CD comes across as warmer) – it’s good to have the sense of being in a plum seat at the concert, without a director’s multi-camera ‘interpretation’, but sound and picture drift in and out of sync quite badly.