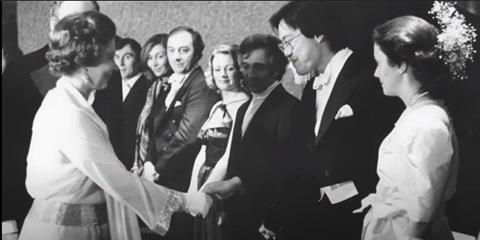 Members of the British Royal Family take part in around 3,200 formal engagements a year. With a reign spanning 70 years, the longest for a British monarch, it’s no surprise that Her Majesty Queen Elizabeth II bumped into some string players during her time on the throne. We take a look at the world of string playing during the Queen’s reign.

1965: Violinist Yehudi Menuhin receives an honorary knighthood (KBE) from Her Majesty Queen Elizabeth II. He received a formal knighthood in 1985 after he became a British citizen, becoming Sir Yehudi Menuhin.

In 1993 he became a baron, The Right Honourable the Lord Menuhin of Stoke d’Abernon, OM KBE and took his seat in the British House of Lords.

Read: How did Yehudi Menuhin’s interpretations evolve over his lifetime?

1976: Cellist Jacqueline du Pré receives an Order of the British Empire (OBE). At this point, du Pré’s multiple sclerosis had put an end to her playing career, though she continued to teach and give masterclasses until her death in 1987.

1977: The Queen celebrates 25 years on the throne with her Silver Jubilee. Estonian composer Arvo Pärt wrote Cantus in Memoriam Benjamin Britten, mourning the death of Britten the previous year. The work’s instrumentation consists of string ensemble and a single bell, pitched at A. The piece is an example of Pärt’s tintinnabuli style, which he based on his reactions to early chant music, giving the sound a minimalist and mystical quality.

1994: The Queen, at the age of 68, attends her first Prom at the Royal Albert Hall on 18 July 1994 with the Duke of Edinburgh. Violinist Ida Haendel performed Britten’s Violin Concerto with the BBC Symphony Orchestra, conducted by Sir Andrew Davis. The all-British programme also included Elgar’s arrangement of the National Anthem, as well as Delius’s A Song of Summer, Holst’s The Hymn of Jesus op.37 and Elgar’s ‘Enigma’ Variations.

Read: Ida Haendel making her first appearance in The Strad in 1937

2002: The Prom at the Palace was held at Buckingham Palace Garden to commemorate the Queen’s Golden Jubilee. Cellist Mstislav Rostropovich appeared as a featured soloist, in a programme that also included Dame Kiri te Kanawa, Julian Bliss, Ashley Wass and many others.

Rostropovich performed Bachianas Brasileiras no.1 by Villa-Lobos, along with cellists of the London Philharmonic Orchestra.

Read: Villa-Lobos and the cello: A voice for Brazil

Watch: The 12 Cellists of the Berlin Philharmonic play Villa-Lobos’s Bachianas Brasileiras no.1

Watch: Prom at the Palace 2002: ‘Zadok the Priest’ attended by HM The Queen and Prince Philip

2007: The Queen and the Duke of Edinburgh attend a White House soirée, hosted by President George Bush, where they listened to a performance from violinist Itzhak Perlman. 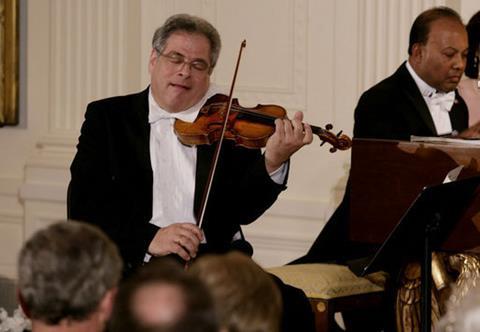 Violinist Itzhak Perlman plays during the entertainment portion of the White House State Dinner in honour of Her Majesty Queen Elizabeth II, 7 May 2007, in the East Room at the White House.

Upon being asked ’What was it like to perform for the Royal Family?’ on Larry King Now, Perlman replied, ’It was a very, shall we say, royal performance’.

2015: The Queen meets Roman Simovic, leader of the London Symphony Orchestra, at a reception at Buckingham Palace. Simovic shows her his 1709 Stradivari violin, on loan from Jonathan Moulds, president of the Bank of America.