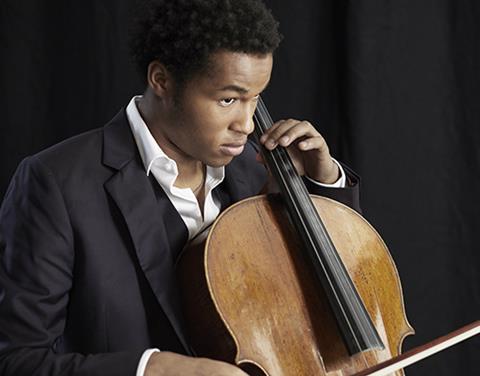 Sheku Kanneh-Mason has returned to Windsor Castle, the site of 2018’s high-profile Royal Wedding performance, to collect his MBE.

Kanneh-Mason, 22, was named as a Member of the Order of the British Empire (MBE) in the 2020 New Year’s Honours List, yet the investiture ceremony was held yesterday at Windsor Castle, having been postponed by the Covid-19 pandemic. He attended the ceremony with his father, Stuart Mason and was presented with the award by The Princess Royal, Anne. He stated, ’It feels like a massive honour to collect this today’

Kanneh-Mason’s meteoric rise began after winning the BBC Young Musician competition in 2016, with his performance of Shostakovich Cello Concerto no.1. He also won the Royal Philharmonic Society Young Instrumentalist Duet Prize in that same year. He gained worldwide recognition in 2018 after performing at the wedding of Prince Harry and Meghan Markle, after which his debut album Inspiration shot to the top of the pop charts in the US. Kanneh-Mason is the highest charting cellist of all time in the UK, his most recent release with his sister Isata, Muse currently at no.1 in the UK classical charts.

With a strong passion for musical outreach, Kanneh-Mason is an ambassador for London Music Masters and Future Talent, and has appeared with the In Harmony education programme. In 2018, he donated £3000 to his former secondary school, Trinity Catholic School in Nottingham, to enable students to continue music lessons.

Kanneh-Mason is studying at the Royal Academy of Music in London on full scholarship with Hannah Roberts. He currently plays a 1700 Matteo Gofriller cello on indefinite loan.