Although her professional career lasted just twelve years, the British musician became a legend in her own lifetime. Julian Haylock assesses her style and recorded legacy in this feature from June 2016 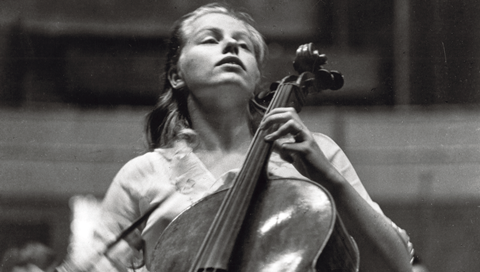 ’I could see her remarkable gift on the very first day,’ recalled Jacqueline du Pré ’s principal teacher William Pleeth in 1967, ‘and as the next few lessons unfolded, one could see that one had endlessness and that everything was possible.’ This moving tribute by the man du Pré affectionately referred to as her ‘cello daddy’ captures the sense of wonder generated by this iconic player.

Even the most prodigiously gifted of her contemporaries – including violinists Itzhak Perlman and Pinchas Zukerman and pianist–conductor Daniel Barenboim (whom she married in 1967) – spoke in awe of her natural flair. Tragically, during the early 1970s she began to suffer numbness in her fingers so profound that at times she could not feel the strings with her left hand or sense the weight of the bow with her right. Multiple sclerosis was diagnosed and in 1973, following a professional career of only twelve years, she was forced to retire at the age of just 28.

‘She had a capacity to imagine sound such as I never met in any other musician,’ Barenboim reflected in later life. ‘She did not know what it was to have technical difficulties or what it meant to play safe.’ Du Pré’s tone was unveiled and direct yet infinitely varied, as though she were revealing an instrument’s natural colours in pristine condition. She played with the same clarity and openness throughout the range, enhancing the lower register with a captivating litheness and immediacy, as though a sonic veil had been lifted.

More than any other player of her generation, du Pré imparted to the cello a sense of interpretative fantasy and bracing technical freedom invariably associated with the violin. Pieces she had played hundreds of times would spring to life as if she were discovering its special qualities for the first time. At her finest she created the impression she was improvising each work as she went along. She embraced her audiences with an emotional vibrancy and generosity that made them feel a vital part of the re-creative process.

If a surfeit of musical instinct and spontaneity can be considered a weakness, then du Pré had a tendency on occasion to focus on short-term expressive intensity at the expense of long-term structural imperatives.

From 1961 du Pré played a bold-voiced 1673 Stradivari cello (later owned by Lynn Harrell and Nina Kotova). Keen to find an instrument with a mellower sound, in 1964 she acquired the 1712 ‘Davidov’ Stradivari, courtesy of her godmother Ismena Holland. This greatly enhanced the range of colours she commanded, as can be savoured on her classic 1965 recording of the Elgar Concerto. However, the ‘Davidov’ didn’t take kindly to her punishing schedule and constant changes in air temperature and pressure, so in 1967 du Pré borrowed (and ultimately bought) a Francesco Gofriller from string expert Charles Beare, which provided her with a more full-throated projection. Her final instrument was a 1970 Sergio Peresson, purchased for her by Barenboim, which she affectionately described as ‘very healthy and strong as a tank’. Du Pré preferred heavy bows, and when her trusty John Dodd was damaged irreparably in a freak accident involving a car door, she switched to a Louis Panormo, which became her natural bow of choice.

Du Pré’s career was cut tragically short before she had time to develop beyond an initial period of international acclaim. She started out recording a comparatively restrained collection of miniatures for the BBC in the early 1960s, including works by Falla, Fauré and Paradis, after which EMI (now Warner Classics) snapped her up and was instantly rewarded with two classics of du Pré’s discography: the Delius Concerto (with Sargent, coupled with Songs of Farewell and A Song before Sunrise) and the Elgar (with Barbirolli, coupled with Janet Baker’s glowing account of Sea Pictures). These immediately established du Pré’s rare ability to recreate in the studio the same sense of emotional imperativeness that informed her live performances.

Although she subsequently went on to work with a number of notable conductors, and in 1968 even stepped outside her comfort zone by premiering Romanza by Alexander Goehr (which was written especially for her), the remainder of du Pré’s official commercial discography is dominated by outstanding musical partnerships with her husband Daniel Barenboim, whether as conductor (Haydn, Dvořák, Boccherini, Saint-Saëns, Bruch, Schumann), accompanist (Beethoven, Chopin, Brahms, Franck) or as a chamber music partner with Pinchas Zukerman in the piano trios of Beethoven and Tchaikovsky.