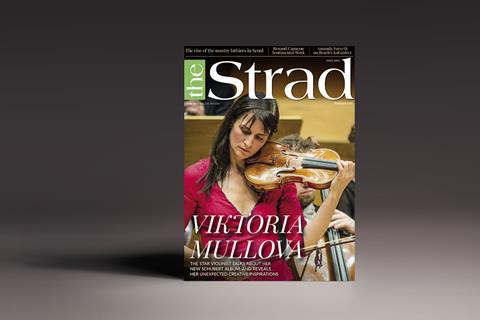 Viktoria Mullova: The violinist discusses her latest Schubert recording with Toby Deller, as well as her collaborative projects with friends and family, and her love of improvisation

Paul Makanowitzky: The long-time teaching assistant of Ivan Galamian was a talented violinist in his own right. David Hays talks to former students to explore his life and career

Violin making in Seoul: Luthier Hagit Gili Gluska finds out how, in just a few years, the Seocho area of Gangnam has become a mecca for instrument makers from around the world

August Rau: The German bow maker was one of the last to uphold the 19th-century ideals of independent craftsmanship. Gennady Filimonov examines several of his bows

In Focus: A 1911 cello by Camillo Mandelli

Making Matters: The secrets of Stradivari’s moulds that are hidden in plain sight

Life Lessons: Astrid Schween, cellist of the Juilliard Quartet, reminisces about her teachers

Opinion: How the fallout from the pandemic has affected practitioners of early music

Postcard from Dublin: A report from Spike, the Irish capital’s alternative cello festival

Sentimental Work: Renaud Capuçon on his love of Brahms’s Violin Sonata no.1 in G major

We also bring you news of the latest products and auctions, plus our regular analysis and opinion columns, and comprehensive reviews of concerts, recordings and books. Simply go to the current issue to explore the full content listing.

Plus, in your May digital edition…