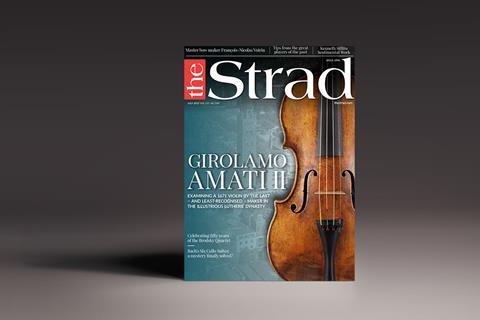 Girolamo Amati II Violin 1671: The last of the Amati dynasty was an almost exact contemporary of Stradivari. Barbara Meyer examines one of his early instruments, alongside one from 1719

Brodsky Quartet: Marking its 50th anniversary this year, the British group has had a colourful career embracing classics and new works. Amanda Holloway meets the foursome

Bach Cello Suites: Jeffrey Solow looks at the several sources for the composer’s famed solo works, to advance a new theory as to the genesis of his compositional process

Session Report: The members of the Heath Quartet talk to Toby Deller about their recording of works by Berg, Schoenberg and Webern, all part of the Second Viennese School

Lost Arts of String Playing: Some of today’s top players tell Charlotte Gardner how they incorporate the stylistic techniques of the 20th century’s greatest soloists into their own playing

François-Nicolas Voirin: Matt Wehling presents the first of two articles about the French bow maker, whose work had an enormous influence on the bows of the 20th century

In Focus: A 1762 Gennaro Gagliano violin

Opinion: Why tutors should look beyond the standard grading system in their teaching

Postcard from Cornwall: Report from the 50th anniversary of IMS Prussia Cove

We also bring you news of the latest products and auctions, plus our regular analysis and opinion columns, and comprehensive reviews of concerts, recordings and books. Simply go to the latest magazine to explore the full content listing.

Plus in your July digital edition: