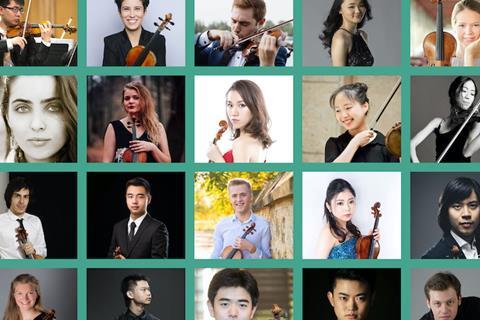 The competition begins with online events and will finish, next year, in person. Thirty-six contestants will participate in the online Quarter-Final Round from 13-16 August and eighteen contestants will advance to the online Semi-Final Round from 18-21 August.  The six contestants who have advanced to the Final Round will be announced on August 22; they will come to Shanghai to participate in the live competition in 2022, according to the national pandemic prevention and control guidelines, performing Violin Concerto ‘Night Tour’ (a newly- commissioned work by Chinese composer Zhou Tian) and a violin concerto of their choice with the Shanghai Symphony Orchestra. They will also perform as part of a string quartet. The winner will receive prize money of US$100,000.

The president of the Organisation Committee Long Yu said: ‘The pandemic has dealt a blow to the global performing arts industry, and it has also caused many young people to lose opportunities. We cannot let them wait for too long. The violin competition is restarting online, and we hope to give a stage to young people from different countries to allow them to display their talents, realize their dreams, and use music to convey confidence and hope to the world.’

He continued: ‘Consistency is the foundation of international competitions. Although the pandemic has disrupted the rhythm of the competition, we will adhere to high standards and high levels to persevere and create new highlights. We are committed to cultivating talented young musicians for the international music industry of performing arts, and also to enhance the international influence of Chinese music in the world.’

The competition received 102 applications from 31 countries and regions around the world by the application deadline in January last year, and now the list of 36 contestants selected for the Quarter-Final Round has been officially released: