‘The ultimate goal of the competition is not ranking’: Shanghai Isaac Stern Violin Competition announces reinvented final round

Instead of competing for rankings, the six finalists will perform in a winners’ concert, as well as receiving USD$20,000 each, future career support and detailed feedback from jury members 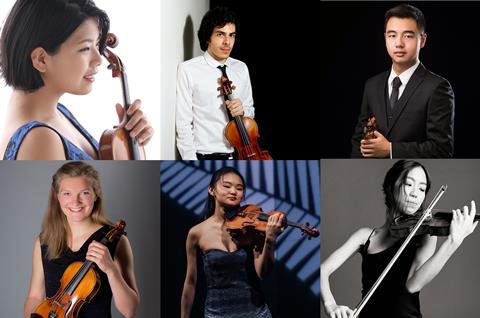 The six finalists for the SISIVC

The Shanghai Isaac Stern International Violin Competition (SISIVC) has announced a change of its competition system. The six candidates that have reached the final round will not be competing for rankings. Instead, they will jointly present a concert entitled ’In Tribute to Isaac Stern’s Centennial SISIVC Winners’ Concert’ from 26 to 28 August.

Each of the six candidates will be awarded a certificate for entering the final round of the 2020 SISIVC, as well as a scholarship of USD$20,000 for their future education and career development. In preparation for their videos, each candidate will receive support from the SISIVC to pay for their expenses incurred in order to guarantee a professional quality recording experience.

The jury committee will not give scores for each performance, but they will provide detailed feedback of each candidate’s performance, acting as mentors rather than competition jury members.

The SISIVC hopes that this new final round structure will emphasise support for the players’ future musical and career development, rather than rankings. ’The ultimate goal of the competition is not ranking. This is just a means to discover and support musicians,’ commented Long Yu, president of the organisation committee and music director of Shanghai Symphony Orchestra (SSO).

’Under the current circumstances, it is more important to effectively send these six candidates on track to the next chapter of their music journey. That’s why we have decided to provide them with scholarships and continued support measures, in order to help them head into the future with an easier and more determined path. The jury members were touched by this plan too. They saw in it the organisers’ respect for music and young musicians.’

’I am very proud of the imaginative solution that the SISIVC has put in place in order to bring the 2020 competition to a just conclusion. The continuing difficulties connected to the pandemic have obligated us to invent an entirely new outcome,’ said David Stern, organisation committee member and co-chairman of the jury committee.

’The six talented candidates who managed to make it to the finals already deserve credit for persevering during these difficult times. Offering these young people an equal amount of money as a scholarship and planning future concert appearances with China’s premier orchestras shows that the SISIVC is committed to supporting young talent beyond the expected competition structure. These six musicians represent the future, and our job is to be part of a worldwide network that is committed to supporting them.’

Under the old competition system, the finalists were to compete for the chance to win first prize of USD $100,000, as well as prize for Best Chinese Work Performance Award and the Isaac Stern Human Sprit Award, each worth USD $10,000. Competitors will still perform the required repertoire for the final round, which includes  two concerto performances: a concerto of their choice plus Night Tour by Zhou Tian, a piece commissioned by the SSO.