The US violinist triumphed in the all-female final to take home the $100,000 first prize 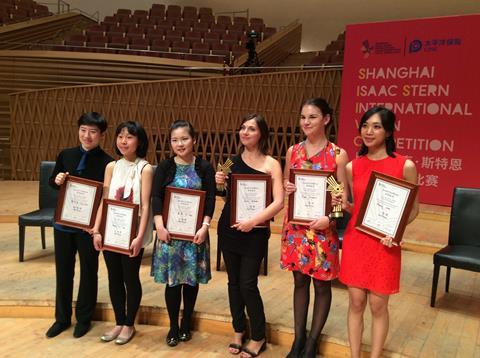 Nancy Zhou has been named the winner of the second Shanghai Isaac Stern International Violin Competition (SISIVC) and takes home the top prize of $100,000.

The 25-year-old violinist from San Antonio, TX, is a graduate of Harvard University and has studied with Miriam Fried at the New England Conservatory. She won second prize at the 2017 Isang Yun Violin Competition and is a laureate of the 2012 Queen Elisabeth Competiton and 2015 Jean Sibelius Violin Competiton.

SISIVC second prize, worth $50,000, goes to 25-year-old Olga Šroubková from the Czech Republic, while third prize, worth $25,000, is awarded to 28-year-old Diana Tishchenko from Ukraine.

Fourth, fifth and sixth prizes, each worth $5,000, go to 22-year-old Jia Yi Chen from China, 18-year-old Chang Yuan Ting from Canada and 26-year-old Yun Tang from China respectively. The $10,000 prize for the best performance of the Chinese work is awarded to Olga Šroubková.

The all-female final round, which took place over three nights from 30 August to 1 September, saw the six finalists perform the Chinese commission, Qigang Chen’s La joie de la souffrance, in addition to a chosen concerto with the Shanghai Symphony Orchestra conducted by Michael Stern.

The first edition of the biennial competition was won by Japanese violinist Mayu Kishima in 2016.