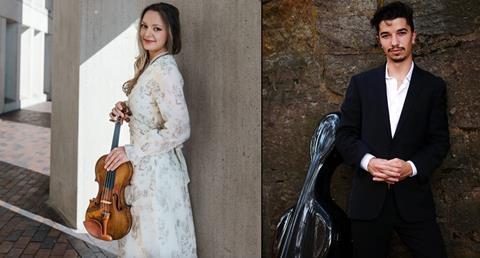 The winner of the Ysaÿe, Tibor Varga and Joseph Joachim International Violin Competitions in 2021, Ioudenitch began learning the violin at age three, ’because there were too many pianists in the house’. Raised in Kansas City, Ioudenitch studied at the International Center for Music at Park University with Ben Sayevich, the Curtis Institute of Music with Pamela Frank and Shmuel Ashkenasi, and the New England Conservatory with Miriam Fried.

As part of her prize at the Joseph Joachim competition, Ioudenitch secured a recording deal with Warner Classics, which will see her release her debut album later this year.

Martins studied at the USC Thornton School of Music and the New England Conservatory. He has enjoyed debuts at numerous prestigious venues, including Wigmore, Carnegie and Merkin Halls, as well as the 92nd Street Y in January 2022 (a review of which will appear in the April issue of The Strad.)

Also working as a composer and arranger, he premiered his Songs of Solitude in the spring of 2021 in collaboration with the Brooklyn Public Library, as well as his arrangements of Bach’s Solo Violin Sonatas and Partitas for cello.

He now resides in Boston, Massachusetts with his partner, violinist Geneva Lewis, with whom he frequently collaborates as a duo. He plays on a composite Francesco Ruggieri cello made in Cremona, c.1690 and a François Nicolas Voirin bow made in Paris, c.1880