The prizewinning trio have scooped first prize which includes $15,000 and an exclusive New York recital 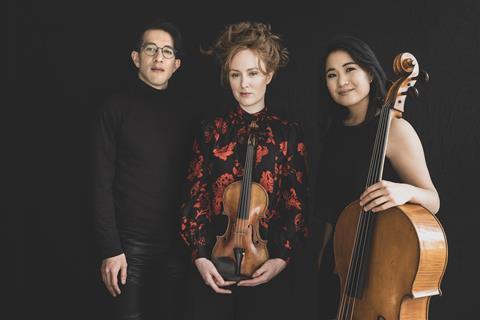 Boston-based Merz Trio have won first place in the Naumburg Chamber Music Competition, held on the 19 September in the Gilda Lehman Hall at the Morgan Library, New York. Comprising of violinist Brigid Coleridge, cello Julia Yang and pianist Lee Dionne, the trio will receive USD $15,000 and a fully subsidised New York recital including the world premiere of a newly-commissioned work. The trio have previously also won the 2019 Concert Artists Guild Competition, 2019 Fischoff Competition as well as 1st Prize and audience prize at the 2018 Chesapeake Competition.

The other two ensembles in the finals were the Balourdet and Ulysses quartets, playing to the jury of Nicholas Mann, David Geber, Carol Wincenc, Samuel Rhodes, Seth Knopp, Paul Watkins, and Mark Steinberg.

Read: Delta: check in a $6 million Stradivari or get rebooked