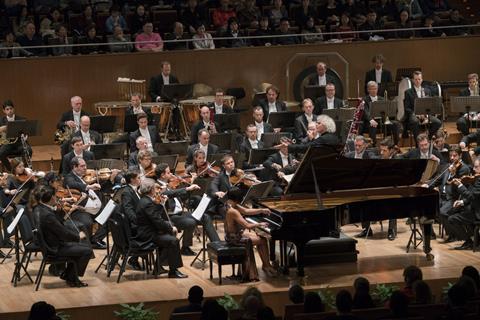 Simon Rattle and the Berlin Philharmonic on tour in Shanghai in 2017, with soloist Yuja Wang

The Berlin Philharmonic has announced plans for a two-year residency in Shanghai, beginning in June 2022. The residency will take place every two years.

The first residency, which will mark the 50th anniversary of diplomatic relations between Germany and China, will comprise four concerts under the baton of chief conductor Kirill Petrenko, as well as chamber music activities, masterclasses, concert introductions and other outreach and community projects. It will be billed as a ’Festival of the Berliner Philharmoniker’. In a statement, the organisers said ‘ the orchestra attaches great importance to a direct exchange with the musical and social life in Shanghai.’

The residency will also mark the first in an exclusive partnership with Wu Promotion, which has previously organised tours in China for the Vienna Philharmonic, Lucerne Festival Orchestra, Beethoven Orchester Bonn and Staatskapelle Dresden among others.

The Berlin Philharmonic has already visited China five times. It began with the orchestra’s first tour of China under the direction of Herbert von Karajan in the autumn of 1979 – at that time one of the first tours of the People’s Republic by a foreign orchestra. In 2005 the orchestra undertook a tour with its then chief conductor Simon Rattle. This tour was brought to a worldwide audience in the film Trip to Asia. Together with Rattle, there were two further stays in China, in 2011 and in 2017 as part of the chief conductor’s farewell tour through Asia. In 2018, Gustavo Dudamel led the orchestra on a tour of Asia which once again included China.