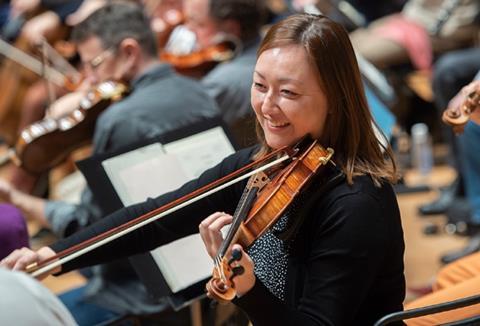 Ito was born in Yokohama, Japan, and grew up in Australia. After studying at the Sydney Conservatorium of Music with Goetz Richter, she moved to Germany in 2003 where she continued her training at the University of Music Lübeck and the Berlin University of the Arts with Nora Chastain. From 2006 to 2008 she was a scholarship holder of the Karajan Academy of the Berliner Philharmonic where she was taught by the then first concertmaster Tōru Yasunaga. In 2009, she was offered her first appointment as second concertmaster at Berlin’s Komische Oper.

In an interview for the Berlin Philharmonic, Ito said: ‘I grew up in Australia. When I was 16 years old, my parents went back to Japan while I stayed in Sydney. My father would regularly send me videos with television recordings of the Berliner Philharmoniker concerts in Japan. I was especially impressed by the recording of Mahler’s Third Symphony under Claudio Abbado with Toru Yasunaga as concertmaster. His playing was wonderful and I determined that one day I would get to know him and the orchestra. I could not possibly have imagined ever playing in it – and actually studying as an Academy scholar with Toru Yasunaga!’