Founded in 1999, Arcus has developed a reputation for making lightweight, durable bows from non-traditional materials. Company director Bernd Müsing explains how a composite bow is made, from initial design to first hair fitting 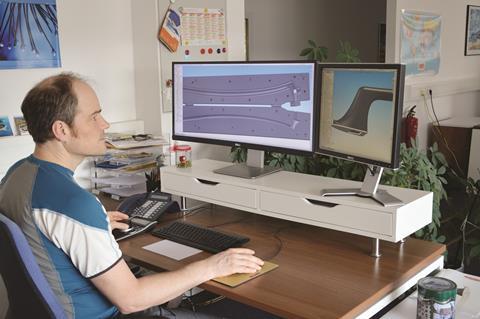 1. In the first stages, the bow is designed using computer-aided design (CAD) software. In this image the mould for the bow stick can be seen on the left-hand screen and the finished product on the right.In addition to CAD, all designs are put through a rigorous round of finite element analysis (FEA), which is used to perfect the curve of the bow. ‘It’s as if we can “play” the virtual bow before we make the mould,’ says Müsing.

Carbon fibre first appeared in the musical instrument market in the early 1980s. At that time, string players tended to turn their noses up at alternatives to traditional pernambuco: synthetic materials were seen as the poor cousins when it came to bow making, and players were reluctant even to try out bows made from anything but wood. Since that time, however, research and development into composite materials have produced radical alternatives to the wooden bow, all of which have abilities and characteristics of their own, and carbon fibre bows have become the primary choice for many serious musicians.

In 1996 Bernd Müsing, director of German-based carbon-fibre bow firm Arcus, set out to find a way of making a bow that was lighter but stronger than anything he could find on the market. ‘Wooden bows were made to play on pure, unwound gut strings with relatively low tension and low mass,’ he points out. He believes that up until now, such bows ‘lacked the resilience or stiffness that is needed to play modern strings properly’ – hence, he looked into the alternatives himself. ‘Carbon fibre is ideal,’ he states, ‘but if you use “now-tech” carbon-fibre composites, the high resin content makes the stick almost as soft as wooden sticks, and just as heavy.’ In his view, as he states, ‘The perfect bow cannot be much heavier than a Baroque bow. Works by Bach, Vivaldi, Mozart, Schubert and Mendelssohn all demand a fast, elegant playing style, which is almost impossible to achieve with a heavy bow.’

Following four years researching the properties of bows, and the materials and workmanship needed to produce a new kind of carbon-fibre product, Müsing sold his first Arcus bows in 1999. Since then, Arcus has continued to carry out extensive research in the field of composite bow development.

Initially based in Klagenfurt, his workshop moved to its present location, Würzburg in northern Bavaria, in 2008. ‘Würzburg is an ancient city that is also famous for its world-class white wine and the Würzburg Residence, a Unesco World Heritage Site,’ he explains.

2. ‘Prepreg’ carbon fibre has been specially pre-impregnated with catalysed resin, which means it is all ready to fit into a mould without the addition of extra resin. The first step in the physical process of making an Arcus bow is to cut prepregs into the strips and pieces that will make up the bow stick. First, these parts are carefully laminated and then put into the mould. 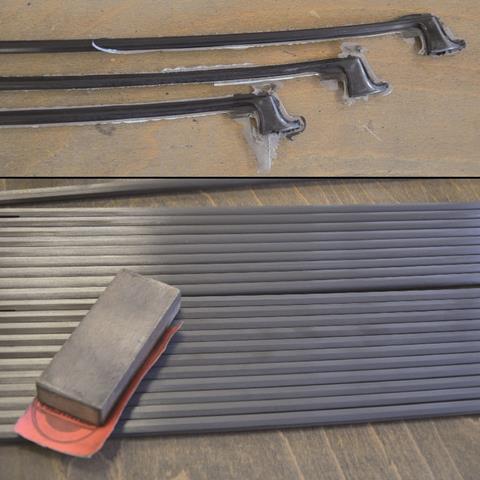 3. After curing at temperatures of 145°C and under 10 bar pressure, followed by a cooling period of several hours, the raw sticks see the light of day and undergo sanding for the first time 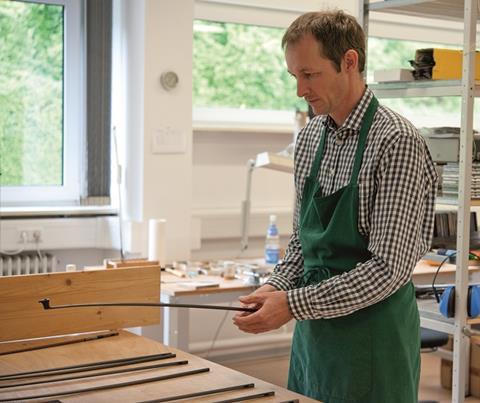 4. Every stick must be checked for its curve, weight, strength and resonance. Each one is then classified accordingly. At this stage, the ideal hair thickness is also determined; this will give the bow its best playing properties. In the photo the bow is being struck on a rubber mat to determine its stiffness and vibrating properties. 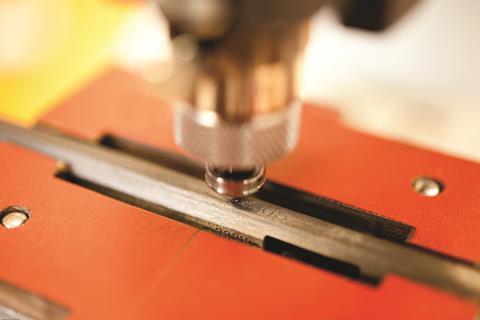 5. In the final stage of the making process, each stick is engraved with its model name, hair thickness and serial number. 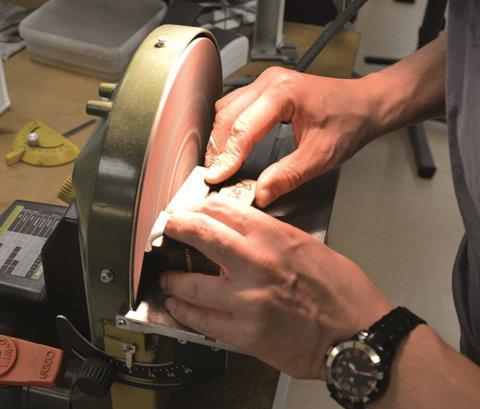 6. Both the sole and the tip are precision-ground, to prepare them for the tip plate. 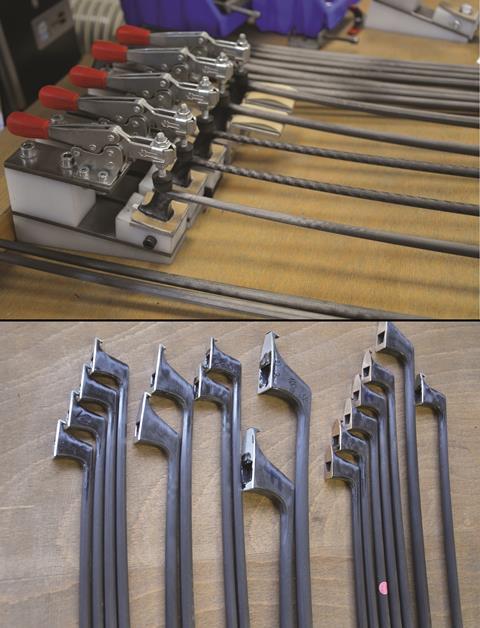 7. The tip plates are then glued to the sticks and clamped, before being left to cure. 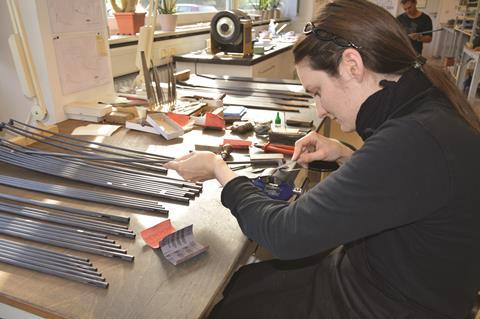 8. Next, the tip and tip plate are carefully filed, to make them all flush and smooth. 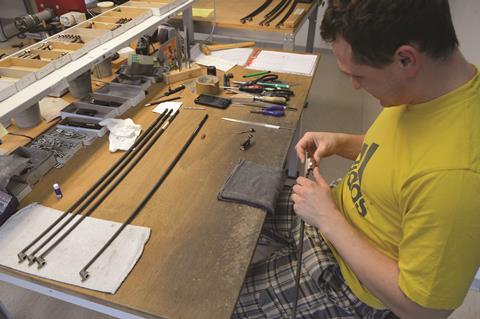 9. Diamond files are used to fit the frog to the bow stick. Almost all Arcus frogs are made from snakewood, which is heavier, stronger and harder than ebony, and also offers good resonance. It was used by bow makers in the Baroque era, and some bass bows are made from it today, even though its hardness makes it difficult to work with. 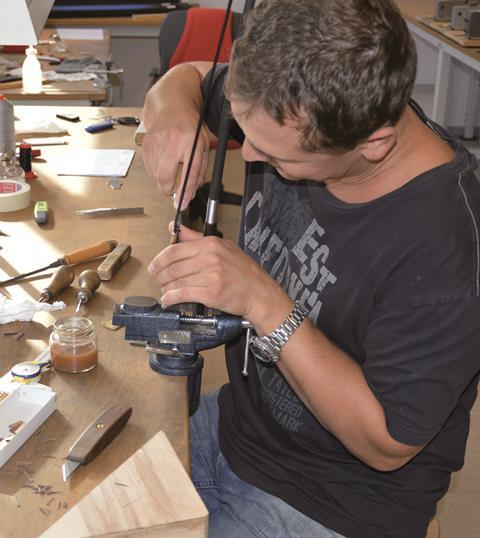 10. Wooden wedges are traditionally used when it comes to fitting the hair to the bow.