A genuine Amati or a clever fake?

Could the cello shown here be one of the eight ‘bass violins’ ordered by Catherine de’ Medici for the court of Charles IX of France? Luthier Filip Kuijken explores the known history of the instrument and considers whether it could be an original Andrea Amati – or a clever fake 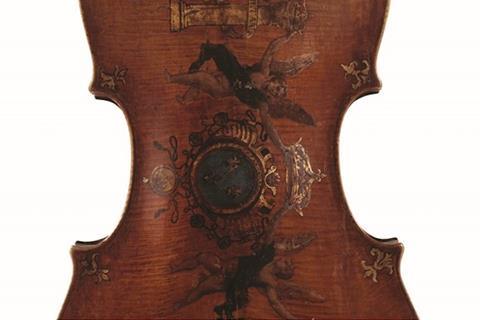 The following is an extract from The Strad’s feature ‘An Amati Mystery’ in our June 2020 issue. To read in full, click here to subscribe and login. The June 2020 digital magazine and print edition are on sale now.

The cello depicted on these pages has for the past half-century been in the hands of Wieland Kuijken, the Belgian gambist and Baroque cellist. It has been heard on many recordings, including all those of the Kuijken String Quartet and on his 2004 recording of the Bach Cello Suites.

Despite having undergone significant damage during its lifetime, it has a very rich palette of tone colours, clear in the higher registers and gradually getting deeper and darker towards the bass, with an increase in ‘body’. The decoration of its front, back and ribs is magnificent.

However, there has always been a question mark hanging over the cello’s provenance. There is no doubt it has gone through extensive modification, but the key question is whether it is one of the instruments made by Andrea Amati for the Royal Chapel of King Charles IX of France, or if it is instead a very clever 19th-century fake.

In May 2019 I brought the cello to the violin expert Charles Beare. After a short investigation he concluded that he could not be 100 per cent sure that the instrument was an authentic Andrea Amati; but he could also not be 100 per cent certain that it had not been made from ‘the remains of something that once was an Andrea Amati’ either. Obviously, too much has happened to the cello during its lifetime for a definitive appraisal of it to be possible.

This is an extract from The Strad’s feature ‘An Amati Mystery’ in our June 2020 issue. To read in full, click here to subscribe and login. The June 2020 digital magazine and print edition are on sale now.