The finest Stradivari in the world will sound poor if it is badly set up. Here are some points to consider sourced from our archive 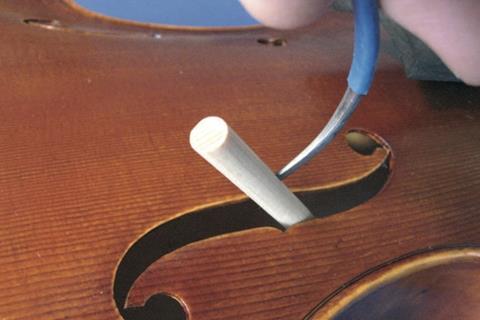 The most humble instrument can be made to perform at a level higher than one might expect through proper set-up and adjustment, just as the greatest masterpiece can be reduced to mediocrity by neglecting this crucial last step in its construction.

There are many ways to bring an instrument into optimal adjustment. My personal approach is based on moving the soundpost, assuming everything else is in a more or less normal place, but successful adjustments can also be made by moving the bridge. If the instrument does not respond to one approach, it means that there is something else that is not working.

I have a few rules that I follow strictly when I make a sound adjustment. Firstly, I never make a move unless there is a clear purpose. If upon evaluation a positive result was not achieved, it is best to return the soundpost to where it was. I never just ‘knock things around to see what will happen’: that is a sure way to become lost and confused. My second rule is to address large concerns first and smaller ones later, but always keeping the bigger picture in mind. In other words, I don’t ‘micro-adjust’. Undue attention to the smallest detail can sometimes cause the whole instrument to become out of balance – to the benefit of only that one small aspect.

An instrument fitted with almost any tailpiece currently available will produce sound at a level sufficient for the casual user. Typically, a lightweight tailpiece produces better sound than a heavy one, but geometry is also important. For a concert violinist who is looking for a way to improve the tone of their instrument, I would recommend a tailpiece with low weight and an angled profile that increases the afterlength of the strings, which changes the balance of the harmonic overtones. This causes an increase in the fullness of the lower strings and an increase in projection across all the strings.

I personally favour a nylon tail-gut as opposed to natural gut or Kevlar, because it is easy to adjust. The length of the tail-gut can be an important factor in sound production. The typical ‘correct’ length of tail-gut puts the tailpiece at a distance of 5–7mm from the saddle, but each instrument is unique, so it’s necessary to experiment to find the ‘sweet spot’.

Effect of bridge shape on tone:

One major aim should be to make the bridge as light as possible, without it collapsing or distorting. But there are two schools of thought on how to achieve this. One dictates that you excavate as much as possible from under the bridge, making the lower arch high and round, and the ankles rather tall, and concentrate the mass in the higher breast of the bridge. From this comes a brilliant, cutting tone that can compensate for a dull, unresponsive instrument. The other way has the bottom sweep cut as low as possible, the ankles short and thin, and the centre of gravity of the bridge close to the table. It may sometimes lack the brilliance of the high-cut bridge, but it makes up for that with richness and depth.

Being such large instruments, double basses are particularly susceptible to changes in temperature and humidity. When on tour with their bass, players are likely to notice a change in the instrument table’s height – and in many countries, the seasonal variation in atmospheric conditions is enough to create a sizeable difference. For these reasons, it is advisable to add adjusters to double bass bridges, to make raising and lowering the strings’ height a simple task.

The sound of a loose post is unsettlingly like that of a tight one: constricted, hollow, unresonant. You know which one is the case by trying to move the thing. If it won’t go, it’s too tight. If it goes too easily, throw it away and make a longer one. If the sound is too sharp and piercing, the post needs to move backwards. If it’s dull and a little boomy, nudge it nearer to the bridge. If the sound is unbalanced across the strings, adjust the top and bottom end of the post separately: the bottom of the post seems to affect the bass strings and vice versa. It sounds remarkably simple, but it really is true.

There are far more varieties of strings available today than ever before. Very good strings are being produced by manufacturers such as Thomastik-Infeld, D’Addario, Super-Sensitive and Pirastro.

You should choose strings that produce a beautiful sound for your inner ear. Try testing them by playing piano, not forte, so that you achieve a contrasting tone with power and beauty.