8 ways to maximise your sound with minimum effort 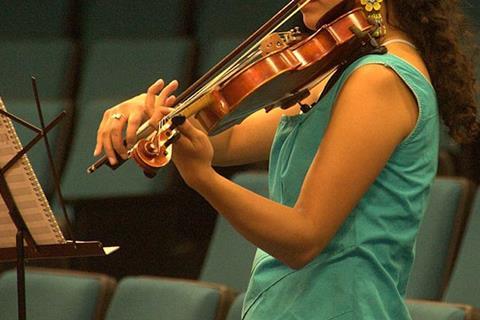 Sound production is dependent on motion, not pressure; so I spend a great deal of time making sure that the line-up of the energy is correctly directed. I prefer to use the word energy here rather than weight or pressure. The alignment of the arms is terribly important to free movement. Along with this should be the sense that the energy is coming from the rib cage, around and through the shoulder blades, and then transferred down the arms to the hands. My shoulders and back are open. If you are squeezing with one hand then you will with the other as well – pressing compromises the freedom of motion.

The height of the elbow during the strokes is very important. You can effortlessly increase your sound just by a more pronounced elbow movement and the pronation of the forearm. The space we create between the arm and the body with the bow strokes is the air that has to come out of the instrument.

Making a good sound requires total freedom of the right arm. It is fundamental that you feel how the string is vibrating. To show the importance of staying relaxed, try the following:

*Play down bow after down bow on an open string, making sure you are as relaxed as possible.

*Tighten your stomach muscles so that your voice sounds strained when you speak. Try to draw your bow fluidly, and notice how much less full the sound is.

*Relax your stomach muscles again and feel how it affects the way your arm flows.

For a martelé stroke, to bite the string before playing the stroke (while the bow is stationary and on the string), the right hand must lever the bow down so that the hair grips the string. When you are pressing the bow into the string, do not use a single muscle in your bow arm that is not required to push the wood down towards the hair and to push the hair into the string. What you do not want to do is raise your upper arm or shoulder, jerk your head or squeeze the neck of the violin between the thumb and finger.

Sound production is not only a physical activity. To give our sound production more freedom so that we can play in a way that serves our imagination, we need to work on playing forte in a relaxed way. Try to play a ‘relaxed’ forte, with a slower bow close to the fingerboard, with a relaxed movement of the right arm. This should give you a sound that is round and not too stiff. Then do the opposite to hear the sound difference.

The first prerequisite to having a beautiful tone is to have the sound already in your head. Just like we speak with the accent of the language we hear, we will want to produce a tone like those we hear from our peers, teachers and in recordings and concerts. The sound is internal, not external. We must have an efficient, flexible and balanced body that is able to make that sound.

The ringing sound of the pizzicato can be used to demonstrate that resonance carries on after the action is complete. The magic and beauty of sound is that it is released, not simply produced. I ask my young pupils to pluck any open string and sense the resistance the string provides. Then I loosen the string and ask them to pluck again. Right away they understand what is missing. A flabby string just lies there, droopy and without life. Engaging the string means dealing with the resistance it offers. Students must learn to do this without tensing the arms, but rather allowing the back to come into play. I follow this by using the bow against the string, illustrating that the action of bowing and using the first finger in pizzicato are similar. It is a delicate balance, learning to release the string and allowing it to ring.

The shorter the string, the less pressure or weight it can take from the bow. If you play a lower and a higher note on one string at the same volume, the higher note requires less bow weight, though the volume of the two notes remains equal.