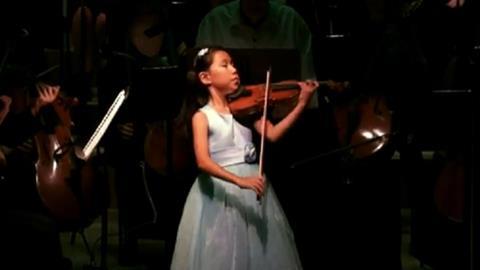 In the video above violinist Leia Zhu, aged 9, makes her debut at London's Barbican Centre, performing Sibelius Humoresque op.87 no.2 with the London Schools Symphony Orchestra conducted by Peter Ash on 21 September 2016.

Watch the young violinist performing the second and third movements of Tchaikovsky’s Violin Concerto with the Surgut Philharmonic conducted by Denis Kirpanev in April 2016.

A student of Itzhak Rashkovsky, Leia Zhu won the International Russian Rotary Music Competition in Moscow in September 2015 – watch her performing Mendelssohn in the final.