11
Should all string players learn how to improvise?

Should all string players learn how to improvise?

Dutch violinists Martin Norgaard and Tim Kliphuis believe teaching children improvisation and alternative styles of music should be a requirement of string lessons in the 21st century, writes Pauline Harding 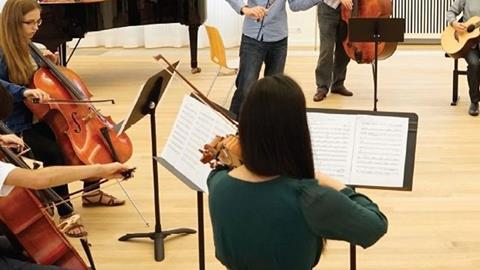 The following article is published as part of The Strad’s Creative Learning feature in the September 2016 issue – download on desktop computer or through The Strad App.

Danish classical and jazz violinist Martin Norgaard, assistant professor of music education at Georgia State University in Atlanta, US, runs improvisation workshops for school children of all ages. He sees improvisation as a powerful learning tool in any style of music.

We teach children to write creatively, not just to read, he argues, so why do we ask young string players to play from the page without encouraging them to improvise or compose? Being creative is an important part of finding one’s own voice, and it can be applied to technique as much as to pitches and rhythms.

‘The problem with traditional instruction,’ he says, ‘is that we give students all their fingerings, and tell them where to shift, where to play in the bow and what dynamics to use, for ten years straight, and then we say, “OK, now you’re a teenager you can play this concerto your own way†. When that happens, they’re not going to know what to do.’

Dutch jazz fiddler Tim Kliphuis, who teaches at the Amsterdam Conservatoire in the Netherlands, even encourages his students to improvise their own cadenzas, just as Bach and Mozart did. ‘Improvisation lets you tell your story in the moment, not somebody else’s,’ he says. ‘You can make your own colours, rhythms and tempos, as long as you have freedom within the notes. It gives you a practical sense of harmonic tension and release, and of the connection between theory and music, and they become one.’

Read: How to improvise on the violin

Read The Strad's entire Creative Learning feature in the September 2016 issue – download on desktop computer or through The Strad App.