A fine cellist is a persuasive advocate for lesser Russian works 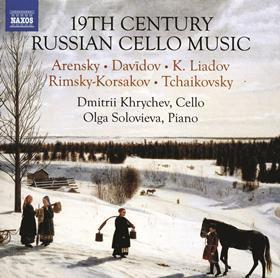 Description: A fine cellist is a persuasive advocate for lesser Russian works

Substantial Russian 19th-century works for cello and piano are somewhat thin on the ground, so it’s inevitable that in this field Tchaikovsky proves to be the towering figure. This world premiere recording of the great composer’s cello and piano version of the Rococo Variations (as opposed to the much better-known one by Fitzenhagen) has much to offer. Harmonically the order in which the variations unfold seems more logical, although the opening passages in the original Finale are perhaps a rather weak point, thereby explaining why Fitzenhagen added or suggested the changes that are mainly heard today. However, this performance by Dmitrii Khrychev and Olga Solovieva is both subtle and lyrically persuasive, highlighting the innate classical elegance of the work.

The technical elements, as you’d expect from the principal cellist of the St Petersburg Philharmonic, are impeccable, and equally so in both the Fantasy on Russian Songs by Davidov, and the Fantasy on Gypsy Songs by Konstantin Liadov. Unfortunately both turn out to be disappointing also-ran salon fare, with lashings of virtuoso writing adorning rather routine melodies. Rimsky-Korsakov’s Serenade is another unremarkable offering, and it is left to Arensky to light the beacon for more arresting material. In particular, the Four Pieces op.56 offers both virtuosity in the Humoresque and subtle melodic ideas in the captivating Romance and Chanson triste. Again Khrychev and Solovieva have this idiom under their skin, and produce carefully crafted and expressive performances supported by a suitably ambient recording.