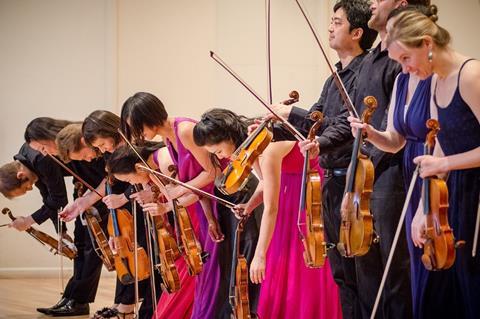 Playing together in person for the first time since February 2020, the ECCO players began exultantly with Jessie Montgomery’s rapturous Starburst (2012). Abetted by the resonance of Advent Lutheran Church, the ensemble’s tone was a joy. That same joy infused Where Springs Not Fail (2015) by Hanna Benn, based on a poem by Gerard Manley Hopkins, a reminder that tonality hasn’t quite left the building just yet.

From 1996, Golijov’s Last Round was inspired by a Julio Cortázar short story about – of all things – boxing, and is a tribute to Astor Piazzolla. Scored for two ‘competing’ string quartets with a bass as middleman (or maybe referee), it bristled in ECCO’s hands – the ferocious first movement picking up speed with ultra-precise glissandos and an increasingly frantic mood. The second movement is a sorrowful ode. In the elegant, slow tango rhythms, the nine musicians found empathy, grief – and strength.

It’s always intrigued me that Barber’s evergreen Adagio for Strings (1936) uses one of the most difficult keys for those forces, B flat minor. Also required: extreme attention to tuning and phrasing. But neither of these was likely on listeners’ minds as the musicians revelled in the waves of blissful suspensions. It can be difficult to hear this familiar piece anew, but here any doubts faded away. To close came another chestnut, Tchaikovsky’s Serenade for Strings, overflowing with Mozartian elegance. Though the composer preferred a large ensemble, somehow these eleven players made its transparency even more evident. And the contrapuntal brilliance of the finale had me smiling with glee.