In this article from January 2011, Matthew Rye examines the life of the great performer, conductor, composer and teacher whose full-bodied sound, broad tonal range and impeccable technique stemmed from years of hard practice 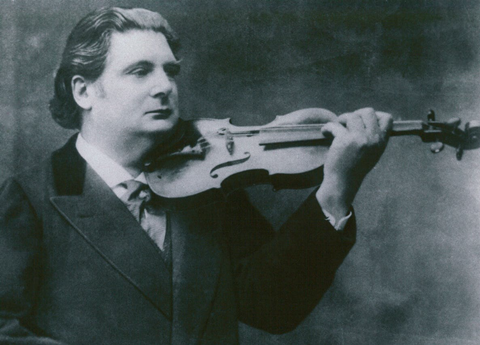 Eugène Ysaÿe was the figurehead of the Franco– Belgian school of violin playing, and the major link between the generation of Vieuxtemps and Sarasate and the greats of the 20th century. He was a hugely influential player, and although not as many of his pupils reached the heights as those of Enescu or Flesch, for example, his shadow hangs over many of the best violinists of the past hundred years. He was a significant composer for his own instrument, with the six Solo Violin Sonatas op.27 his crowning achievement, and he also composed an opera late in life.

Ysaÿe had his first violin lessons when he was five from his father, a pupil of François Prume. At the age of seven he joined Désiré Heynberg’s class at the Liège Conservatoire but was expelled for poor attendance and ‘insubordination’. A couple of years later he returned to study there with Rodolphe Massart. After winning the conservatoire’s silver medal in 1874 he went to Brussels to study with Wieniawski and thence to Paris to work under Vieuxtemps’s tutelage. After four years inthe French capital he moved in 1881 to Berlin to take up the post of leader of the Bilse Orchestra, a beer-hall ensemble that would later form the basis of the Berlin Philharmonic. There he was effectively talent-spotted as a potential soloist for the Colonne Concerts in Paris and his touring as both concerto exponent and recitalist began in earnest – as early as 1882 he toured Russia.

Ysaÿe’s many years of training honed an immaculate technique. It was jokingly said that he was the first violinist to play in tune

Despite Ysaÿe’s long life, his career as a major soloist spanned little more than a third of it: not only was his training long and arduous, but by the outbreak of the First World War in 1914 he suffered more and more from neuritis and diabetes, and he began to concentrate more on one of his other great musical gifts, conducting. He had turned down the offer of the directorship of the New York Philharmonic in the 1890s, but with his violinistic powers waning, he gladly took up the post of music director of the Cincinnati Symphony Orchestra between 1918 to 1922. Thereafter, while he continued to playpublicly on occasion, he occupied himself principally with teaching – pupils included Josef Gingold and violist William Primrose – and composition until his death in 1931.

Ysaÿe’s extensive years of training (he was no child prodigy) honed an immaculate technique. It was jokingly said that he was the first violinist to play in tune (it is true that reliable intonation was not always a given among even his most esteemed predecessors). He was among the first players to explore the possibilities of vibrato as an expressive tool rather than merely as a means to projecting a note or (in some cases) hiding dodgy intonation. What made his vibrato stand out in particular was its variety of speed and width in order to enhance the different notes in a phrase. He used all the virtuosity at his disposal not for show but, again, to heighten the expression within the music he was playing.

He created a full-bodied sound, distinct from the drier tonecommon among his predecessors, and it is said that his tone grew through his middle age along with his girth.

In many ways, Ysaÿe was the first truly modern violinist, in terms of tonal range and the use of technique to enhance expression but, above all, in his wholehearted use of rubato, making earlier players seem mechanical by comparison.

Ysaÿe had an unconventional bow hold, which may have contributed to a general weakening of his bow arm at the time when his playing was waning. His bow control was undoubtedly adversely affected by the circulation problems in his hand caused by his diabetes.

Ysaÿe’s first violin of note was a c.1754 Guadagnini (see The Strad Calendar, 2010), procured from a Hamburg pawnbroker, but in 1896 he persuaded a pupil to take it in exchange for her Guarneri ‘del Gesù’ (plus some money to make up the difference in value; she also gained a husband when she married his brother Théophile). This 1740 instrument served him for the rest of his career, and was later owned by Isaac Stern. Ysaÿe also owned the ‘Hercules’ Stradivari (1732) from 1895 until it was stolen from his box at the St Petersburg Imperial Opera House in 1908 (it reappeared at a Paris dealer’s in 1925 and was later owned by Henryk Szeryng, who donated it to the City of Jerusalem for use by the leader of the Israel Philharmonic Orchestra). But he preferred to play the more agile ‘del Gesù’, reserving the heavier-going Stradivari as his back-up in case a string broke.

Ysaÿe stood out from both his predecessors and successors for thehigh-brow nature of his concert programming, which included whole recitals of sonatas, something of a rarity in the 1890s. He was at the forefront of performances of new music, taking part in the world premieres of such iconic works as Franck’s Violin Sonata (its composer’s wedding present to the violinist), Debussy’s String Quartet (with his own Ysaÿe Quartet) and Chausson’s Poème. In the concerto repertoire he excelled in the Classical and early Romantic masterworks, and was especially admired for his Beethoven. Ysaÿe’s own best-known works, the six Solo Sonatas, were composed in the mid-1920s, when his own playing career was largely over. By dedicating each to a major violin-playing colleague (including Thibaud and Enescu) it was as if he was handing over the mantle to a new generation.

His recorded legacy unfortunately includes none of these epochmaking works and, limited by the acoustic recording technology of the second decade of the 20th century, is of necessity dominated by short, encore-type pieces, including miniatures by Fauré and Wieniawski, the finale of the Mendelssohn E minor Concerto with piano, and arrangements by Kreisler and Joachim. All that survives, from sessions at the Columbia Studios in the Woolworth Building, New York, in 1912–14, is contained on a hard-to-find single CD released in 1996 by Sony Classical (also included are four French pieces with Ysaÿe conducting the Cincinnati orchestra). The transfers can’t do much about the ever-present shooshing noise, but the style, immaculate phraseology and power of Ysaÿe’s playing still manage to break through the aural rainstorm.

Read: From the Archive: September 1901