1
From the Archive: September 1901
Playing Hub

The Strad’s regular correspondent ‘Lancastrian’ (Dr William Hardman) gives his impressions of Eugène Ysaÿe, then at the height of his powers 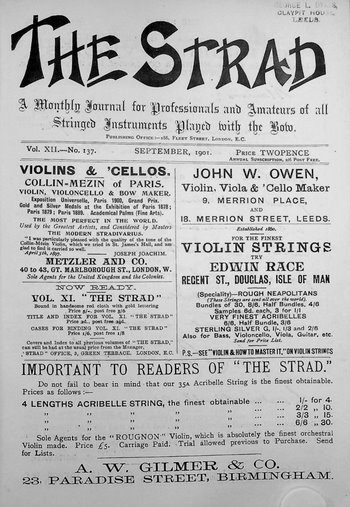 Ysaye the man is tall and massive, a combination of Apollo and Sandow. A powerful, muscular, healthy, strong man apparently, if anything, too muscular; it is not easy to bring under control, and impart delicacy as well as strength to such masses of muscle as he possesses. There is a danger of such a man being what pugilists call “muscle bound.” Ysaye’s face is magnificent. Large, dark, with black lustrous eyes, broad, beautiful forehead, surmounted by a splendid mane of very dark, almost black hair. Nose, neither roman nor aquiline, and yet prominent. Mouth firm, and perhaps sensual, chin firm. As far as appearances go he is quite the most striking personality amongst living twentieth century violinists. His manner is natural and unaffected, and he thoroughly conveys the conviction that his whole soul is in his art.

As a player the most remarkable feature about him is his intense and irrepressible emotionalism. He seeks not to control or hide it, but lets himself go thoroughly. He appeals to his audience by the simplest and most direct method, that is, to the heart, and thus his admirers number thousands, while some other equally great or even greater artists only number hundreds. He is an impressionist. He is strongest in that in which most modern artists are weakest, viz. the emotional part.

Undoubtedly, Ysaye’s success does not depend upon a vast and infallible technique, for, to tell the truth, his technique is neither the one nor the other. His intonation is often surprisingly erratic—as was also Ernst’s—and his method of bowing is, I think, the most awkward I ever witnessed in an admittedly great artist. He has no wrist movement at all. I mentioned this to a clever professional, and he said, “Oh, but don’t you know that is considered the best way of playing now.” I did not know, and when I remembered the extraordinary mobility of Brodsky’s wrist, and that Paganini’s wrist was so flexible that an eye witness said, that when he played, his hand was more like a rag tied to the end of a stick, than anything else he could think of, I am loth to believe that the principles of violin technique can have so changed that absence of wrist mobility, has now become a desirable excellence. Nothing succeeds like success. Ysaye is a great success, and there is evidently a tendency to magnify and praise everything that he does. I can’t help thinking he could do more and with less exertion if he had a more flexible wrist.