The Walton Cello Concerto brings back fond memories for the British cellist, from one of his first concerts to a recent performance by early mentor Steven Isserlis 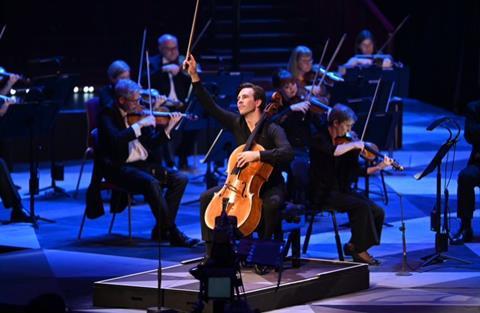 Guy Johnston performing at the BBC Proms in August 2021

I first got to know the Walton Cello Concerto when I was 21 years old. I was at a stage in my career when I was learning a lot of new concertos, but this invitation was special – it was for a concert celebrating the centenary of the composer’s birth, and Lady Walton was to be present at the concert. The concerto is full of technical challenges: the second-movement Allegro appassionato includes triple-stops and stratospheric harmonics, while there are two cadenzas in the final Theme and Improvisations. As it happened, I was attending the International Musicians Seminar masterclasses at Prussia Cove while I was studying the concerto, and I had the chance to play it for Steven Isserlis. He made it look so easy! There are a number of ‘safe’ fingering options where you can stay in position across the strings, but he encouraged me to remain on the A string so I could really feel and vocalise those big leaps in the first movement.

Walton wrote the concerto while living on the Italian island of Ischia, and the music seems to conjure up images of the sun glistening on the water and the beautiful scented garden the Waltons created. There’s a rocking, lilting accompaniment in the first movement that emerges again in the last, which gives a kind of meditative feel to the piece. The Theme of the third movement has a searching, longing quality about it that evolves through all the improvisations into all kinds of dramatic rhetorical gestures.

The atmosphere of the concerto carries one off into a sort of dream world. I can’t help thinking there must be a personal narrative to this concerto. It ends in a sombre mood, as it falls to a low C – not too dissimilar to Strauss’s Don Quixote, which finishes with the main character’s death. The dream world gradually evaporates by the end.

It’s interesting that the concerto was written for Piatigorsky, who wanted it to have a completely different, more virtuosic finale. And around 20 years later, Walton wrote an alternative ending to the concerto. I think we should respect the original as the one he wanted, though, and I’ve always played that version in the performances I’ve given so far.

Since that first concert I’ve read more about Walton himself, which helps to get closer to the notes and develop one’s instincts for the piece. I try not to listen to other performances, especially when I’m learning a piece from scratch, but last summer I heard Steven’s own performance of the concerto at the BBC Proms. I’d only just returned to the US after playing at the Royal Albert Hall myself, and I was captivated: I was listening while pushing my baby daughter in a pram through a park, and on a beautiful warm summer’s day, I had the feeling that Walton must have felt when he was writing it on Ischia. When he reached the coda, Steven made it seem as if time was somehow suspended, which I thought was particularly magical. It caused me to wonder when I might have a chance to play it next, and just a week or two later I had a call from the BBC Philharmonic to invite me to play it with them in January 2022!

It’s been a while since my last performance, and it turns out that I’ve lost my original copy of the score. I always advise my students at the Eastman School of Music to work from the score rather than just the solo part, so they can explore the harmonies and therefore the character and the mood of the piece. It’s not the same listening to a recording and thinking that you know everything there is to know about it. And it’s also liberating for me not to be led by my original markings as I’m relearning it.