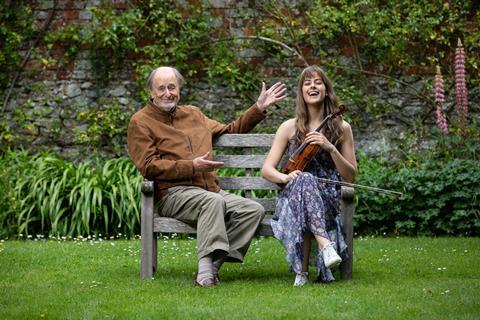 Autumn 2018. The first of many outings to the heart of Devon to discuss Mozart with Sir Roger Norrington. The train has stopped, a lone sheep is grazing between the tracks…

The train conductor seems to find it quite amusing: he updates us every five minutes on the stubborn static nature of the animal. A passenger sitting a few rows back asks if anyone has a carrot. An elegant white-haired lady answers laconically, ’Actually, to get a sheep to move you need another sheep’. I text the Maestro to warn him of the growing delay. ’What better way to immerse yourself in a historically informed atmosphere!’ comes the ironic answer, signed Sir Rog.

Ever since our first meeting at the Royal College of Music followed by Salzburg and a Brahms Concerto at the Philharmonie in Cologne, the collaboration with Norrington has been for me a continuing source of ideas, inspiration, joy. Indeed, if I hadn’t met him I might have waited another 20 years before recording Mozart’s concerti: they are the jewel and fulcrum of the violin repertoire. But here we are in Glasgow with the Royal Scottish National Orchestra, about a year after my first day-trips to Devon, ready to bring ’our’ Mozart to the world, the fruit of animated and unforgettable discussions, ideas, smiles and imagination.

Recording a CD requires a lot of willpower, combined with superhuman endurance. Usually it takes about three days, approximately a three-hour session for each 15 minutes of music to record. Self-criticism is real, harsh, and it can be demoralising because you are dissecting your sound, your breath, your own musical sensitivity. But with Sir Roger it’s fun, dare I say almost easy! Suddenly everything makes sense, the direction that I have been seeking tenaciously for years is reborn, spontaneous and fresh,  thanks to his ability to convey and relate with naturalness his encyclopedic knowledge of classical performance practice and the history behind and inside each note. He summarises this in what he calls the six ’S’s’: Sources, Size, Seating, Speed, Sound, and Style.

Sources: Leopold, Mozart’s violinist father, published a highly influential treatise in 1756, the year of his son’s birth. It’s safe to say this would have been the base of his teachings to the young genius – who later would play these concertos.

Size: The Salzburg court orchestra usually had six first and six second violins, the exact numbers Sir Roger decided to use for our recording with the RSNO. It was inspiring to see a powerful modern symphony orchestra play with all the lightness and finesse of the best specialist chamber orchestras under his guidance.

Seating: We used the standard arrangement of the time, with the two violin groups opposite each other, and the double-basses central.

Speed: Allegro, happy but not too fast. Andante, by no means slow; considered by the Mozart to be ‘much the same as Allegretto’. Adagio, an ‘easy’ Andante rather than a really slow movement.

Sound: In 1775, vibrato was a decoration occasionally used by soloists, not at all by good orchestras. Leopold wrote that if one used it all the time it would sound ‘as if one had a fever’. I especially enjoyed exploring this aspect of sound production with Norrington, creating depth and direction with bow speed rather than vibrato.

Style:  Leopold encourages us to ‘vary the music as much as humanly possible’.

So we must not just play the notes, but need to follow the harmonic rhythm. Sir Roger refers to this as gesture rather than phrasing.

We also discussed Mozart’s appoggiaturas, which should be played on the beat and are usually quite clear as to length. Trills are also interesting, mostly starting from the upper note and never showy or too ’healthy’, rather a byproduct emerging from the first note.

Mozart is also mostly clear about where he wants staccato, marking it indifferently as a stroke or a dot. Where there is no indication of staccato or portato Sir Roger always opts for smooth, on-the-string playing, avoiding the short and slightly aggressive accompaniments often heard in modern interpretations.

All of the above provides the fundamental framework for our approach to this music in our new recording but if you ask him he will shrug and tell you that whoever is incapable of sitting on the floor and making a child laugh with joy cannot perform Mozart, that simplicity and instinct should always guide a performance. ’K.I.S.S.’ as he repeats with a mocking smile as we fight with the jungle of microphones in the recording studio: ’keep it simple, stupid’.