Biber’s Mystery Sonatas are the most famous example of Baroque scordatura, but there are many more works to discover, explains Pauline Nobes in this article from June 2003 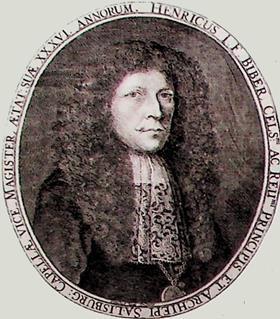 Heinrich Biber, whose notorious Mystery Sonatas may have caused otner scordatura works of the period to be overlooked

Scordatura has often been considered a fleeting fancy, an experimental technique of limited consequence used by a few little-known Baroque composers, even something which went out of fashion for good reasons.

With the rise of interest in historical performance, however, and an increasing amount of time devoted to such specialised techniques, scordatura is under the spotlight again - in particular on several widely acclaimed recordings of Biber’s Mystery or Rosary Sonatas. But for many, the consequence of this limited exposure, focusing on the top end of technical demand and specialisation, has been to place scordatura on a pedestal of unattainability.

The term ‘scordatura’ indicates the retuning (or literally translated, mis-tuning) of stringed instruments; its purpose includes enlarging the range of sonorities available, introducing and exploiting diverse tonal, harmonic and display effects, or simply facilitating the performance of certain chords, figurations and additional bass notes. While it is used with both plucked and bowed stringed instruments in solo and ensemble music, the focus here is on the solo violin. 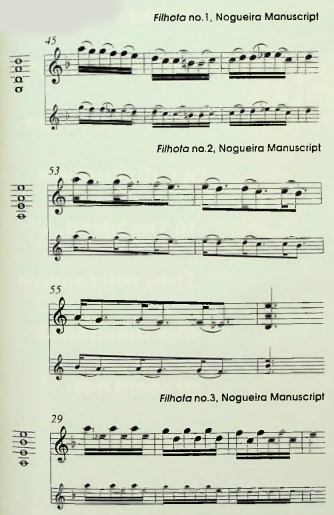 The sound of the instrument is transformed by the retuning, with the extent and type of change dependent upon the tuning required. Even passages which are playable with standard tuning may be transcribed into various scordaturas purely for the effect on timbre. The most prolific period of composition involving scordatura was the second half of the 17th century, particularly among the Bohemian and Austro-German violinist-composers, and even though at this time it was recommended only for the ‘masters’, the diversity of music embraced by scordatura is, in fact, remarkably wide. So before the wonders and wealth of opportunities afforded by scordatura become excluslively associated with Biber it is intriguing to consider the different ways in which this technical device was used and to examine the range of compositions besides the works of Biber.

The practical difficulty of constant retuning, especially to the more remote scordaturas, with the inherent problems of tuning stability as well as the complexities and confusion of visual-versus sounding-pitch intonation, may well have been in fact contributing to scordatura’s gradual decline: criticisms of faltering tuning were as pointed then as  they are today. A remarkable number of works in the solo violin repertory of this period retain the normal tuning of the second string to a’, and while this may be coincidental, it does present itself as a useful constant.

By definition, scordatura implies moving away from the normal tuning, thus involving more than the change of pitch seen in pieces such as Mozart’s Sinfonia Concertante, where the solo viola’s strings are all tuned up a semi-tone. By altering the interval between the strings, the scordatura violin becomes a mixture of several transposing instruments. With the exception of a minority of sounding-pitch notation where the fingering, and sometimes the tuning itself have to be calculated, scordatura pieces are written as they are played, in so-called hand-grip notation. In order for the notation to work, some basic rules of performance must be observed - keep to first-position fingerings and use open strings unless otherwise instructed or implied. The continual use of stopped strings and more sophisticated, higher-position fingerings are generally considered later additions to violin technique and not as relevant to this style of writing.

The most famous example of sounding-pitch notation is probably Bach’s Cello Suite no.5, where the A string is tuned down a tone. For violin, the earliest example of scordatura with sounding-pitch notation is Biagio Marini’s op.8 Sonate (Venice, 1626-9); the new tuning is specified during the course of the piece (g d’ a’ c”) and, having lowered the top string during a seven bar rest, a passage of sounding minor third is played more easily as predominantly perfect fifths.

The Nogueira Manuscript’s three Filhotas are all comfortably playable in their sounding-pitch notation but each has a different tuning instruction given inrelation to the tuning of a small, guitar-like, Portuguese folk instrument called the machinho. Taking one of the old-style niachinho tunings and numbering the violin strings from the bottom G, scordaturas may be deduced which support several stylistic and technical features.

The first and second Filhota both have three bars of slurred pairings, which then become assigned to a single string per bar, and the third Filhota has a string-crossing pattern which in scordatura is maintained for the whole passage. (In all music examples, the top line denotes hand-grip notation; the bottom line represents sounding pitch.)

The second Filhota also has the drone accompaniment on an open string as well as facilitated double-chopping when the scordatura is applied. The majority of pieces, however, use the hand-grip notation where the written notes make sense only when  passed through the scordatura violin transposing system. The Canario of Vilsmayr’s Partita IV would appear bizarre without any previous knowledge of scordatura playing. In addition to scales including intervals larger than a tone when fingered, accidentals often oppose at the octave due to the phenomenon of playing in different keys on different strings (see example 2).

Key signatures and textual accidentals in scordatura notation are often inconsistent, relying to varying extents on the performer’s understanding of the mechanics. Accidentals at the beginning of pieces, which appear to be key signatures, reflect the different transpositions of the retuning; they only apply to the note at the designated pitch and do not necessarily represent the tonality of the piece. These ‘key signatures’ often appear unfamiliar and the more specific they are, the more extreme they appear on paper. Pieces with less specific key signatures often incorporate textual reminders either on or above the stave. A discrepancy appears in the key signatures of the three versions of the D major Gigue or Pfiepferstoppe, an anonymous piece that appears in several manuscripts.

Accidentals, as well as key signatures, are revealed as ‘unreal’ in cases where intonation is affected by the scordatura transposing system. Although the intonation of certain notes is always open to adjustment in string playing, according to their immediate context, scordatura corrections need to be made with a clear knowledge of the actual note being played. Playing a low, written f sharp” with an open a’ (as in Baroque D major) isn’t always appropriate since when the sounding-pitch is e”(as in the above tuning) it makes a fifth with the open a’ and could therefore be too low. This discrepancy does, however, become less marked if fifths are narrowed and fourths widened, in accordance to the popular Baroque tuning systems.

The extent to which scordatura is exploited varies considerably from composer to composer as well as according to national styles. One of the trademarks of the trend is an increased resonance in both chordal and non-chordal passages, gained from a greater use or sympathetic resonance of open strings. This is seen both in the simpler music and where tunings that are close to the overall tonality.

Englishman Thomas Baltzar’s Set of Tunings (two Almands, a Corant and a Saraband) needs an A major tuning and exploits the use of all four open strings to produce the main key chord:

Some uses of scordatura simply retune the bottom strings to enhance or create new bass notes. Vivaldi’s La Cetra concerto no. 12 raises the bottom string to B flat, greatly benefiting the arpeggiations in his written-out cadenza. One of the very few French examples of scordatura, Corrette’s Concerto a violon sent in L’Ecole d’Orphee (1738) uses the bass-resonant tuning g b a’ e”. The work not only has arpeggios over an open string pedal bass but also octaves played as sixths and unisons played as thirds on the lower two strings in the viola clef. Nardini uses both bass and treble clefs in the notation of his Sonata enigniatique, and later in the century Lolli tuned the G string down to a low D.

Italy is sometimes underestimated for its early contribution to scordatura. Unlike Marini, other Italian composers experimenting with scordatura use the more accessible hand-grip notation, for example the solo violin pieces of Lorenzo Bocchi, Carlo Ambrogio Lonati and Mario Uccellini, as well as the more remote tunings of Giuseppe Colombi and Giovanni Maria Bononcini. Colombi’s unaccompanied solo pieces always notate the scordaturas from the bottom G string, probably indicating the intervals between the strings rather than pitch. Taken literally, with today’s standardisation of pitch, this would set the violin very low. A practical solution, minimising the retuning  and even restringing, would be to keep the A string constant, transcribing g c’ e’ g’ into F (c’ f’ a’ c”) (see example 5).

The Austro-German and Bohemian scordatura repertory includes several anonymous manuscript sources, such as those located in Kromeriz and Klagenfurt. A vast number of works appearing in the Klagenfurt collection and also in London’s 1679 GPD manuscript are stylistically related to movements or pieces attributed to Schmelzer. This raises the question as to whether Schmelzer is, in fact, an unaccredited composer of a substantial amount of scordatura music and indeed equally concerned with this aspect of violin technique, as was his colleague Biber.

Vilsmayr shows an intimate and sophisticated knowledge of scordatura - hardly surprising since he studied with Biber. As with Biber’s Mystery Sonatas, the different tonalities are reflected by the colour and use of his chosen scordaturas. Vilsmayr’s notation of open or stopped pitches is characterised, perhaps as expected, with the bright, major-orientated and sharper keys including many open-string resonances (especially the top siring). However, his C minor Partita which includes an Aria Lamentole uses the open lop string almost only in conjunction with occasional multiple slopping and has many passages notated on the A string as ‘lower’, darker stopped alternatives. 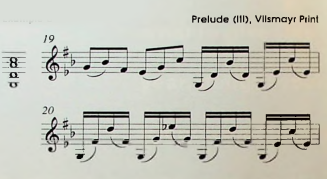 A SELECTION OF SCORDATURA WORKS

In the technically more advanced repertory both violinistic and virtuoso issues are clearly taken into consideration. In this Prelude from the Vilsmayr Print, patterns of string crossings are continued by not choosing the top string notation for the d” and e” flat in bar 20 - had these been written as g” and f”, the player would have been forced to pass over a string to reach the lop notes:

Whereas these examples do show a likely consideration and understanding of violin technique, they may also represent times when a composer has accidentally reverted to sounding pitch notation, something which does happen on occasion. The ‘master’ performer would know which notes he is playing in which ever tuning. This is clearly necessary with regard to intonation but would also therefore allow a certain freedom in choice of fingerings.

Biber’s Mystery Sonatas have been revered as exhibiting the ’most extensive and imaginative use of scordatura in the history of music.’ This is unquestionable within the confines of a single collection, but much of the lesser-known repertory provides worthy companionship and substantial context for Biber’s work. The extent to which scordatura was used, the number of tunings supplementing those of Biber, the number of composers and performers attracted to it over the centuries and those who continue to be fascinated by it today, is indeed remarkable. Ranging from the technically simple dance to the virtuoso concert suite, there’s something for everyone in scordatura music.