You don’t need years of study to play Baroque cello with style and panache, argues Daniel Yeadon in this article from June 2000 - just a willingness to think differently 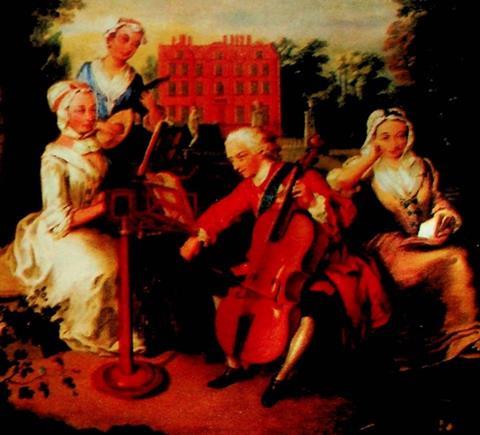 Relatively few modern string players have taken an interest in Baroque instruments and the performance practices associated with them. I play both Baroque and modern cello professionally and I can say that my involvement with the Baroque has a constant influence on my approach to later repertoire, it can be hard work to maintain a technique on both sets of instruments but the rewards are enormous. Put a set of gut strings on your cello, borrow a Baroque bow and have a go!

The line drawings (below) show the differences between a typical 18th-century cello and a modern cello. The wedge under the fingerboard was eventually removed, the neck angled back and the bridge height increased. Most modern siring instruments are set up in a state of high tension that maximises tone production and penetrating power, both qualities being highly prized for performance in large venues. By contrast the sound ideal for instruments in the Baroque era was one of internal resonance, and this was readily achieved by the use of lower tension in the Baroque set-up. 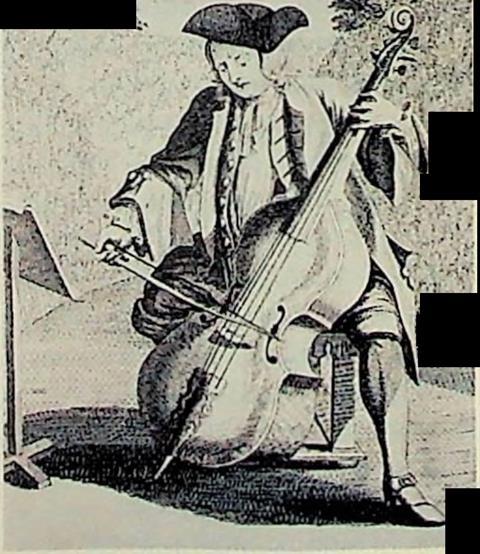 Playing without a spike

It may seem perverse to choose to play without a spike, but it does help in the process of learning to play on gut. A spike brings the cello higher against the body and angles it to the players advantage for all the athletic passagework of 19th- and 20th-century compositions. However, the original hold of the cello allows a greater freedom of movement in the upper body, when experimenting with this, bear in mind that the cello does not need to be gripped lightly between the knees: it is sufficient to make a diamond shape with one’s legs, resting the cello on the side of the calves and wedging the feet as comfortably as possible underneath. Chair height is critical for the greatest degree of comfort: this varies, of course, with the height and leg length of each player. 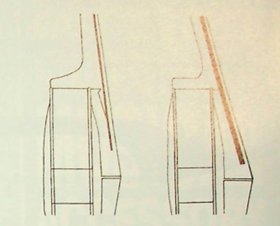 Metal strings naturally produce a slightly hard-edged sound which is a result of prominent high harmonics in their sound profile. The use of vibrato both softens this hard edge and helps the sound to carry through a large space. By comparison gut strings have a softer, more translucent tone and the relatively small number of high harmonics allows the sound to blend more easily with the resonance of other instruments. There is nothing to stop you exploring the tonal qualities of gut by fitting gut strings on to your modern instrument. All the brands have their merits, and in my experience different cellos respond to different strings. Most players use plain gut A and D strings and gut-core G and C strings with metal winding. It is possible to obtain plain gut G and C strings: they produce an extraordinary sound that carries well, but many cellists find them prohibitively thick.

String makers in the 18th-century experimented with metal loaded gut strings which are still manufactured today. These strings have the tonal quality of gut but with a little extra punch. Tune your instrument at the commonly accepted Baroque pitch. A = 415Hz - a semitone lower than modern pitch. This relaxation of tension will create some of the characteristic resonance. 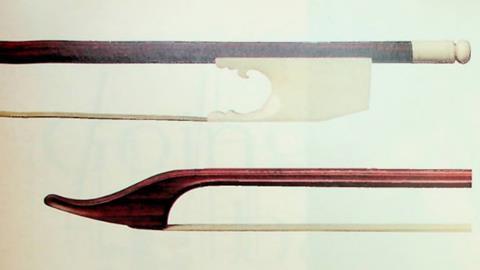 The convex shape of the Baroque bow allows it to hug the string a little more than a modern bow. This is an advantage when playing on gut strings as they have more surface resistance than metal, and dealing with this resistance factor is the key to making a good sound. The Baroque bow is also ideal for achieving the articulation of shorter notes. Try out some different bow strokes, holding the bow a little further away from the frog and keeping your middle finger in contact with the hair.

Notice the resistance at the beginning of each stroke. For longer strokes try to overcome this by using bow speed rather than pressure and allow the shape of the bow to create a natural bloom and decay of sound. You should  have the sensation of drawing out the sound from the instrument. Shorter articulated strokes can be achieved easily nearer the heel of the bow by using a dig and release action, almost like plucking.  Many Baroque theories of bowing were based on the principle of down bows being considered stronger than up bows. Understanding this can be surprisingly difficult for the modern player who spends many formative years aiming to play strokes of equal weight.

Baroque performing practices continue to be the subject of a vast range of discussion and research. Our knowledge of the way musicians played in the 17th and 18th centuries necessarily relies on our own interpretation of the many texts and treatises written at the time; some of those texts are listed at the end of this piece.

l have heard many criticisms of period instrument performances along the lines of ‘too mannered’, too broken-up’ or not lyrical enough’. Preoccupation with the line of a melody, so treasured in the late-Romantic era. was equally important in the Baroque period. Slurrings and articulations  should be regarded as forms of punctuation along the way. In fact the marrying of these factors is probably the greatest challenge for us when interpreting the repertoire. Both Leopold and Mozart and the flautist Quantz have much to say about the art of tasteful melody playing.

Clearly there is more scope for this in faster movements than in slower, more obviously expressive ones, but even in the latter case there are many instances where an articulated bass line can provide a beautiful contrast to a lyrical upper line.

Most Baroque music has its origins in dance. Awareness of the steps in a given dance will certainly help us to assign a hierarchy of stresses to any sequence of notes within it. As a rule of thumb the last beat of a bar is the strongest, corresponding to a downward, earthbound motion in the dance. Often the interest lies in departures from this rule; for example, the minuet is based on a longer step pattern  than is contained in a single bar, so emphasis should be made on every alternate bar. The sarabande has an important step on the second beat of the bar. so the emphasis can be stronger than on the first beat; Bach’s third solo cello suite provides a perfect example of this.

Other factors in establishing hierarchy include an awareness of harmony and of strong rhythmic figures. The harmony in Bach’s works is often so rich that it becomes the determining factor in shaping a performance, while Telemann is usually more preoccupied with wild folk rhythms. 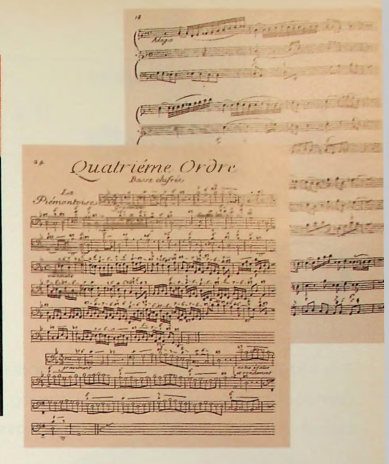 An ornamented melody line by Corelli

One of the roles of a Baroque cellist is to underline the strong harmonies specified by a composer in the form of figures above the bass part. In general the harmonic language in Baroque music is shaped by the interplay of consonance and dissonance, or tension and release. Dissonances represent the emotions of trouble, excitement, sorrow, grief and suffering. Consonances represent rest, contentment, pleasure and joy. Many writers of the period including CPE. Bach, suggested that dissonances should be emphasised and consonances played weaker. This is why Baroque specialists tend to play more softly at a resolution or cadence than during the moments beforehand. Harpsichord and lute players will often give more weight to dissonant chords by including more notes and spreading them in a striking and unusual way.

Another common criticism of early music performances is that they are out of tune, a problem which can often be traced to the hazards of playing on gut strings. Their susceptibility to variations of temperature and humidity means that regular tuning during a performance is essential for good intonation. Adopting a wide range of tuning systems is necessary for a successful transition to Baroque performing ideals. String players complain regularly about the difficulties of tuning properly to a modern piano, and this is because we are naturally inclined to make pure intervals in our own sequence of notes. Such intervals do not exist on the piano as it is tuned in equal temperament.

A striking feature of many Baroque temperaments is the existence of pure thirds and leading notes above the tonic of the simpler keys; the relative flatness of these pure intervals compared to modern tuning might account for the modern ear hearing performances as out of tune. Playing Baroque music with a harpsichord tuned to a different temperament is a great challenge, and a risky one. but the results can be ravishing. It is certain that some composers wrote with specific temperaments in mind, and in doing so they deliberately chose the key of a piece to create the mood. Keys with several sharps or flats can vary enormously with temperament: in some cases pleasing to the ear and in others disturbing!

The decoration of a phrase of music is a fundamental aspect  Baroque performance practice. Without ornaments such as the trill, appoggiatura, turn or mordent, a lot of Baroque music simply sounds plain. Dramatic effects can be created by varying the length of an appoggiatura or the speed of oscillation of a trill. Fortunately many composers of the period wrote extensively about the subject, and it is clear that the execution of ornaments was considered a finely judged art form. Ornamental styles varied considerably across the nations of Europe. The brilliant spontaneous embellishments of the Italians in music by Tartini. Corelli and others was a world apart from the subtle turns and passing notes in the music of the French courts. A combination of reading and experimentation is the best means of absorbing ornamentation into performance.

Many Baroque composers and performers treated vibrato as another form of ornamentation or a means of sweetening the tone of a note even further. Try practising the melody of a Baroque sonata or concerto, or indeed a bass line, with little or no vibrato. This places the focus for expression firmly on the bow. Get as much expression as you dare from your cello without vibrato before adding it as an expressive device or for reasons of projection.

Any modern cellist who decIde to embrace the Baroque cello undertaking a fascinating adventure into a different sonic world. For me adapting to Baroque style has raised many questions about how I play recent music, both from a technical and musical point of view. The logistical nightmare 1 sometimes experience in switching between Baroque. Classical and modern instruments is definitely outweighed by the richness of the learning process involved, a process which keeps my musical life continually fresh.