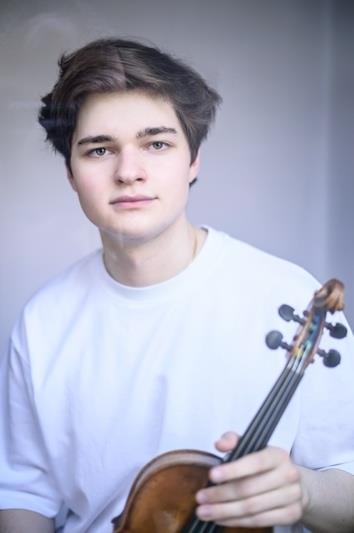 Sony Classical has signed 20-year-old Italian-Serbian-French violinist, Luka Faulisi, on the same day as he joins the roster for general management at IMG Artists.

In a statement, Sony Classical announced that the ‘rising star’ will release his debut album Aria under the label in Spring 2023.

Joined by pianist Itamar Golan, the album will include famous arias and scenes by composers including Bizet, Gounod, Rimsky-Korsakov, Szymanowski and Tchaikovsky arranged for violin and piano, including an arrangement by Faulisi of Verdi’s Sempre Libera from La Traviata.

‘Luka Faulisi has an extraordinary musical gift. We are thrilled that he has recorded his debut album for Sony Classical,’ Per Hauber, president of Sony Classical said. ‘It is a privilege to work with such a talented young artist as Luka and with someone with such a clear vision for his future’.

’From the very first time of hearing Luka’s remarkable violin playing, I was struck by his expressive sound and the scope of his musical imagination.  He has a bright, forward-thinking mind while also being firmly rooted in the great violin tradition,’ SVP International A&R of Sony Classical, Alexander Buhr said.

Faulisi is currently studying at the Academy of Lorenzo Perosi in Biella, Italy under Pavel Berman. Berman described Faulisi on his website as an ‘incredibly gifted virtuoso violinist’. He previously studied with Boris Belkin at the Conservatorium Maastricht in the Netherlands.

‘I am extremely honoured at the opportunity to work with Sony Classical and its energetic and imaginative team,’ Faulisi said. ‘Having grown up listening to the much-celebrated Sony recordings by Jascha Heifetz and David Oistrakh, Sony has always had a significant influence on my artistic development since my early childhood. They possess an impressive ability to innovate and to initiate successful projects while respecting the immense heritage of the company.’