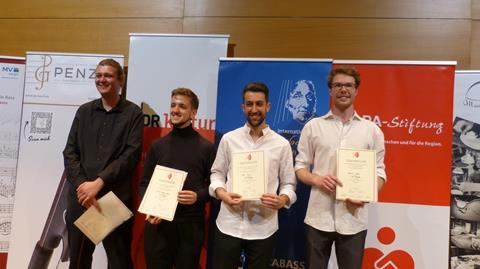 Spanish double bass player David Santos Luque has won first prize in the International Johann Matthias Sperger Competition for double bass 2022. Held in Rostock, Santos Luque was declared the winner following the final round of the competition on Sunday 3 April.

He received a cash prize of € 8500, donated by the Oscar and Vera Ritter Foundation Hamburg, as well as the special prize for the best interpretation of the contemporary compulsory piece by Toshio Hosokawa.

The second prize of € 4500, donated by Guido Mariotto and Dorin Marc, went to José Trigo from Portugal, who also won the audience prize. Third prize of €2500, donated by Günter Klaus, went to Moritz Tunn from Germany, while Croatian musician Igor Šajatovič won fourth prize of a bow from master bow makers Roland and Matthias Penzel.

The finalists were accompanied by the Norddeutsche Philharmonie Rostock. The prize winners also receive concert engagements.

The Sperger Competition is one of the largest competitions for double bass in the world. Held every two years, the competition is organised by the International J.M. Sperger Society and was held at the Rostock Academy of Music and Theatre. NDR Kultur plans to broadcast a programme about the competition in the series Das Konzert in April.